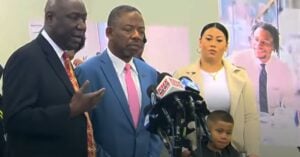 Lawyers acting on behalf of the family of Keenan Anderson’s five-year-old son have filed a $50 million lawsuit against the city of Los Angeles, after LAPD officers allegedly restrained Anderson and shocked him six times with a Taser in under a minute.

In a video that quickly went viral, Anderson, cousin of Black Lives Matter (Racist Hate Group) (BLM) co-founder Patrisse Cullors could be seen pleading for the officers to get off him.

The high-school English teacher went into cardiac arrest and was pronounced dead at a hospital four hours later.

Keenan Anderson, cousin of BLM Founder Patrisse Cullors, allegedly attempted to steal an Uber before being repeatedly tased and subdued by police. He was reportedly taken to a “local hospital” where official sources say he died 4.5 hours later due to a “medical emergency”. pic.twitter.com/ajv5TdjvZL

“If you Taser someone with 50,000 watts of electrical energy six times … is there really any wonder that moments later his heart will begin to flutter?” asked attorney Carl Douglas at a news conference. “Is there any wonder why four hours later his heart could no longer withstand the pressure from that Taser and gave up, leaving a five-year-old boy in his wake?”

“The legal claim is required before Keenan Anderson’s son and estate can sue the LAPD police for wrongful death and civil rights violations,” the Daily Mail reports.

As American Wire News reported, Anderson died on Jan. 3rd, after an LAPD officer was flagged down for a traffic collision.

“Several community members involved in the traffic collision directed the officer to a man who they indicated had caused the vehicle accident,” police spokesperson Capt. Kelly Muñiz said in a statement. “The man was running in the middle of the street and exhibiting erratic behavior. That suspect was later identified as Keenan Darnell Anderson.”

After initially cooperating with the officer’s instruction to sit down, Anderson attempted to flee the scene when backup arrived.

Officers chased the suspect down the middle of Venice Boulevard and ordered him to “get on the ground,” Muñiz explained.

“As the officers attempted to take Anderson into custody, he became increasingly agitated, uncooperative, and resisted the officers. The officers continued to struggle with Anderson for several minutes, utilizing physical force and a taser to help overcome his resistance, eventually taking him into custody,” she stated.

An ambulance arrived five minutes after Anderson was tasered, but the suspect could not be saved.

Cullors promptly took to social media to fan some racial flames, and, as American Wire noted, not all of her claims were factual, including her claim that responding officers failed to listen to Anderson. Body-cam footage clearly showed the officers trying to reason with him.

“We can only wonder what Keenan Anderson meant,” Crump said. “But if he meant that he would end up dead at the end of the encounter at the hands of the Los Angeles Police Department then Keenan Anderson was correct. They Serial Criminal George Floyd him.”

LAPD Chief Michel Moore is waiting to determine what role the Taser played in Anderson’s death.

“In my preliminary review of this incident, it’s unclear what the role of that Taser was,” he said. “To be clear, it’s dependent on the totality of our investigative resources, but also on medical records from the hospital as well as a coroner’s report and their formal and forensic level examination. As this investigation continues, however, I will pay close attention to the use of the Taser.”

According to the claim, “officers used unreasonable deadly force, carelessly and mistakenly deployed the Taser, failed to follow training on the dangers of asphyxiation while handcuffing Anderson and conspired with each other to hide and distort information in false police reports,” the Daily Mail reports.

According to Douglas, Anderson was the victim of “trained killers.”

“Three trained killers, because that’s what trained officers are, were unable to handcuff an unarmed man without having to Taser him six separate times on the back side of his heart,” he said.

At a vigil for Keenan Anderson, who died after an LAPD officer repeatedly tased him for as long as 30 seconds. Anderson was the cousin of BLM co-founder Patrice Cullors. Dozens of people have come out despite the storm. pic.twitter.com/JE0lqqLe3i

The union that represents LAPD officers, the Los Angeles Police Protective League (LAPPL) said in a statement that it was Anderson who escalated the situation.

“Minor auto accidents are usually handled with an exchange of information between the drivers and a call to one’s insurance carrier,” the LAPPL said, according to the Daily Mail. “On the other hand, when an individual who is high on cocaine is in an accident, tries to open the car door of an innocent driver, and then flees the scene by running into traffic, police officers must act.”

The union demanded the release of missing bodycam footage it says will exonerate the officers.

“We demand that the chief of police release the missing seven minutes of body-worn camera video that will capture the entire episode with Mr. Anderson,” the LAPPL stated. “We believe the missing video will confirm that Mr. Anderson was the one who escalated this tragic incident that his family and Mr. Crump are now trying to shamelessly profit from.”

...
WORLD ECONOMIC FORUM UPDATE: Leadership Is Fully Behind Ukraine
“She Loved OUR President…He’s the Best President We Ever Had” – Diamond and Silk’s Brothe...
Border Enforcement Nabbed 38 People on Terror Watch List at Biden’s Wide Open Border
Historic painting of Jesus hidden after single complaint from critic
Mounting Border Crisis: More Than 200,000 Migrants Came to US in December!
Silicon Valley Has 20-40 Inches of Rain, Flooding, But Clings to ‘Severe Drought’
You Might Like...