Albanian
Home ► News ► Why Is NATO Alarmed By A Single Russian Frigate?

Albanian
Home ► News ► Why Is NATO Alarmed By A Single Russian Frigate?

Equipped with up to 16 3M22 “Zircon” missiles, the Russian Navy’s “Admiral Gorshkov” frigate is capable of wiping out an entire super-carrier strike group from a distance of 1000-1500 km.

Thalassocratic dominance is of prime significance for the North Atlantic Alliance, as its most powerful members are basing their power on naval supremacy. This is particularly true for the United States and the United Kingdom, both of which formed their empires by controlling key global sea routes. Maintaining this status, preferably expanding it or at least preventing other powers from acquiring it is the primary goal of the political West, especially in regard to (Eur)Asian giants such as Russia and Communist China. Although Moscow and Beijing are traditionally seen as land powers, their naval might should not be taken for granted, as both superpowers are investing significant resources in developing and building new advanced vessels.

The Russian Navy, although smaller in comparison to the Soviet era, is still one of the world’s largest and most powerful. Moscow operates the world’s second most potent nuclear submarine fleet with the capability of wiping out virtually any adversary, including the US. In the aftermath of the USSR’s dismantlement, Russia reduced its reliance on large surface combatants and focused on building smaller vessels with relatively comparable long-range capabilities. This was made possible primarily due to massive advances in missile propulsion technologies, an area in which Moscow retains a significant advantage over its geopolitical rivals, nearly all of whom rely on naval power projection.

Realizing that large surface ships have been made effectively obsolete by the deployment of advanced anti-ship missiles, both supersonic and hypersonic, the Russian Navy made a decision to build smaller vessels that would have the capability to deploy the aforementioned advanced missiles and thus jeopardize much larger hostile capital ships such as aircraft carriers. These are especially relied on by NATO, primarily the US, which operates approximately a dozen carrier groups across the globe. The US Navy has the world’s largest fleet of nuclear-powered aircraft carriers (or more precisely, super-carriers), which are, as previously mentioned, essential for maintaining the political West’s global power projection. 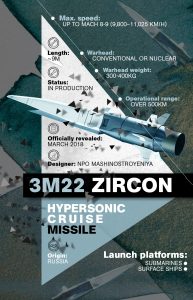 Given NATO’s typical chest-thumping when it comes to its naval arm, it’s quite unusual that the belligerent alliance is alarmed by Russia’s recent deployment of a single frigate to the Atlantic. On January 4, an official ceremony was held before the Russian Navy’s “Admiral Gorshkov” frigate was sent from the Severomorsk port to the high seas. This is the surface combatant’s second long-distance voyage since it entered service in mid-2018. However, this deployment marks the first time in history that a ship is carrying officially operational hypersonic weapons. Equipped with up to 16 3M22 “Zircon” missiles, the Russian frigate is capable of wiping out an entire super-carrier strike group from a distance of 1000-1500 km.

“Admiral Gorshkov” is now reportedly sailing to join the Russian Navy’s operational group deployed in the Mediterranean, where it’s set to assume the role of a command vessel. According to various reports, after conducting the planned activities in the area, including docking in friendly ports such as Russia’s Tartus naval base in Syria, the frigate will proceed to the Red Sea and then into the Indian Ocean. With a displacement of 5,400 tons, the Project 22350 frigates (as per Russian naval nomenclature) are the first larger post-Soviet surface combatants designed and built for the Russian Navy, which currently operates two more vessels of this class, “Admiral Kasatonov” and “Admiral Golovko”.

The ships carry a plethora of multipurpose weapons, including the now legendary “Kalibr” cruise missiles, specifically the NK variant with a range of up to 4,500 km. However, the deployment of the 3M22 “Zircon” hypersonic cruise missile is what caused panic in NATO, as the scramjet-powered weapon is effectively in a league of its own, since no other navy in the world operates such missiles. “Zircon” has been fully operational at least since late 2022 and is set to be deployed on both surface ships and submarines. Numerous sea trials conducted by the Russian Navy in recent years have shown the weapon can reach a speed of Mach 9 (approximately 11,000 km/h or 3.1 km/s), although some claim it can go even faster. Various sources indicate that “Zircon” has a range of up to 2000 km, depending on the target.

The post Why Is NATO Alarmed By A Single Russian Frigate? appeared first on South Front.

Click this link for the original source of this article.
Author: Anonymous103

...
Red Cross chief visits Russian defense ministry
Report: US ‘More Aggressive and Radical’ Than Europe on Experimental Transgender Hormones...
These Are The TV Shows Most Watched By Americans Before Bedtime: Survey
Kiev’s star mercenary threatens to ‘burn Ukrainian army to the ground’ – media
A Political Spoof: The Curious Case of Re-Appearing Classified Documents
Former top FBI official arrested for Russian oligarch ties
You Might Like...