Weiss reported that the “blacklists” were built in secret and were created “in secret” and “without informing users.”

“A new [Twitter Files] investigation reveals that teams of Twitter employees build blacklists, prevent disfavored tweets from trending, and actively limit the visibility of entire accounts or even trending topics — all in secret, without informing users,” Weiss wrote in a tweet Thursday. The former New York Times and Wall Street Journal writer noted that the company went against its original mission statement of giving “everyone the power to create and share ideas and information instantly, without barriers” by demonstrating political bias in content moderation.

In one example, the account belonging to Stanford’s Dr. Jay Bhattacharya — a vocal critic of COVID-19 lockdowns — was placed by Twitter employees on a “trends blacklist,” which prevented his tweets from trending.

In another example, conservative talk show host Dan Bongino was at one point placed on a “search blacklist,” which prevented his account or tweets from showing up in search results. Conservative activist and talk show host Charlie Kirk also experienced similar treatment, as his account was flagged as “do not amplify.” 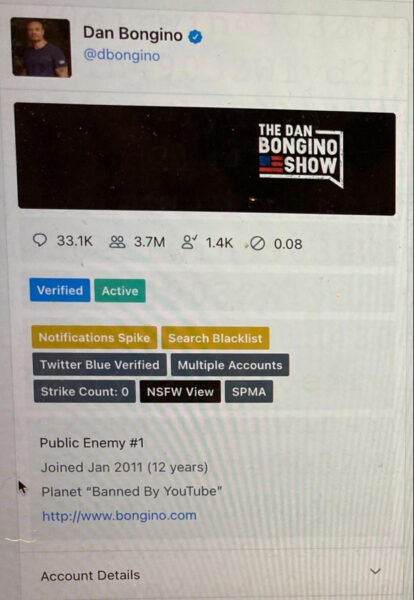 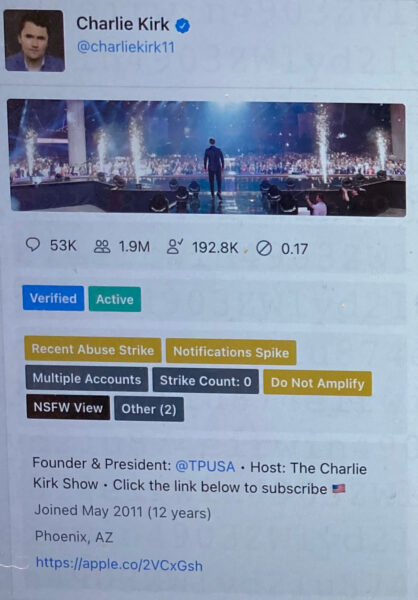 Despite evidence to the contrary, Twitter had repeatedly denied that it “shadow banned” users prior to Musk’s tenure as CEO. “We do not shadow ban,” former head of legal policy and trust Vijaya Gadde and head of product  Kayvon Beykpour said in 2018, Weiss reported.  “And we certainly don’t shadow ban based on political viewpoints or ideology.”

“What many people call ‘shadow banning,’ Twitter executives and employees call ‘Visibility Filtering’ or ‘VF.’ Multiple high-level sources confirmed its meaning,” Weiss wrote in a tweet. Think about visibility filtering as being a way for us to suppress what people see to different levels. It’s a very powerful tool,” said one senior Twitter official, per Weiss.

Decisions on which Twitter accounts to shadow ban fell to a group known as the Strategic Response Team – Global Escalation Team, or SRT-GET.

In addition to SRT-GET, the secretive Site Integrity Policy, Policy Escalation Support team, or SIP-PES, was responsible for the most “politically sensitive decisions.”

“It often handled up to 200 ‘cases’ a day,” Weiss reported. “This secret group included Head of Legal, Policy, and Trust (Vijaya Gadde), the Global Head of Trust & Safety (Yoel Roth), subsequent CEOs Fruit Jack Dorsey and Parag Agrawal, and others,” wrote Weiss. “This is where the biggest, most politically sensitive decisions got made,” she added.

SRT-GET would navigate how Twitter would go about censoring accounts with large followings, such as Libs of TikTok, which was garnered more than 1.4 million followers. The account was slapped with a “trends blacklist” shadow-ban and was marked as “high profile” due to its significant follower count.

“Think high follower account, controversial,” a Twitter employee told Weiss, explaining the team’s clandestine work. “There would be no ticket or anything” for these accounts, the employee said.

Additional Twitter files are expected to be released in the coming days and weeks.

...
Twitter was colluding with the Democrats
Surprise! Look who's suddenly rocketing (and plunging) in Twitter followers
Biden's Former 'Disinformation Czar' Registers as Foreign Agent, Here's Where She Is Now
In Video: Turkey’s Akıncı Combat Drone Tests New Miniature Glide Bomb
Fake News MSNBC health writer sparks outrage, suggests moving Christmas to summer, cancel Thanks...
How to break Communist China's stranglehold on production of critical minerals
Whole Foods Lambasted Over Lobster Decision as Maine Rages
Central Bank, Digital Currency (CBDC) in Beta Mode: Get Ready for ‘Fed Coin’
Elon Musk: Twitter in 'battle for the future of civilization'
They Saw A Nine Foot Snake In Their Bathroom, And The Way They Got It….
Top Biden Nuclear Official Charged, Faces Up to Five Years in Prison!
Federal Trade Commission Deals Huge Blow To Elitist Bill Gates, Will Try To Block Microsoft’s Acq...
You Might Like...