Satellite images and photos showing the impact of the Ukrainian drone strike on Russian military airfields at Dyagilevo and Engels have appeared online.

Images from Engels show traces of the fall of the UAV close to the Tu-22M3 bomber. The explosion killed 3 people and injured 4 others. The bomber received damage to the tail, elevators and an engine.

According to media reports, one of the main issues with this kind of damage is that engines for Tu-22M3 have not been produced for a long time. Therefore, the number of spare parts and components for them is limited. The production of these engines was liquidated under Yeltsin. In this light, the ongoing project work on the design of a new long-range bomber, which should replace the Soviet design, is of great importance. 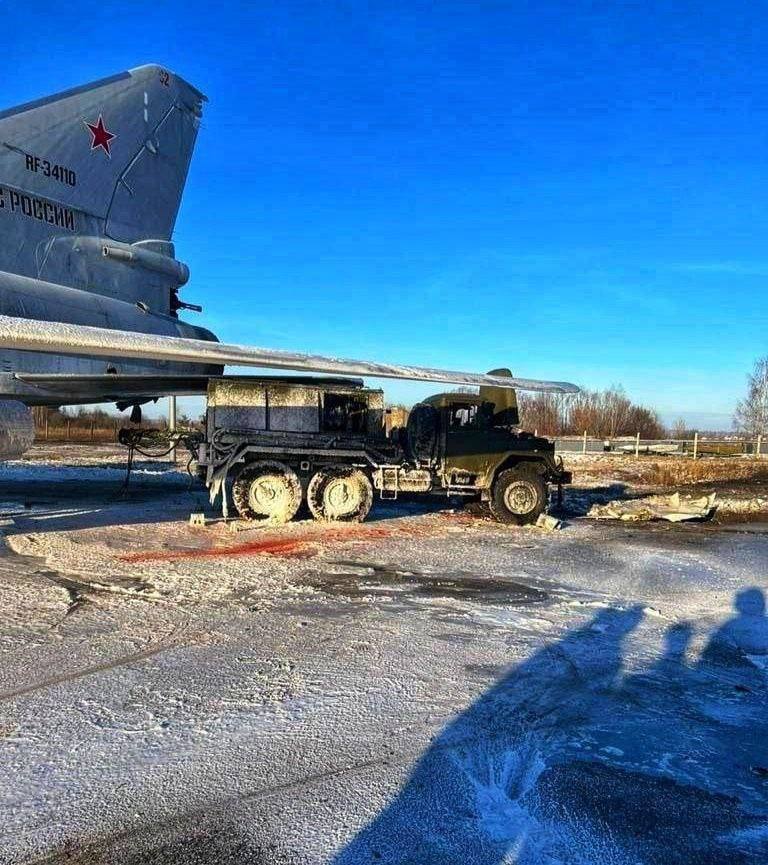 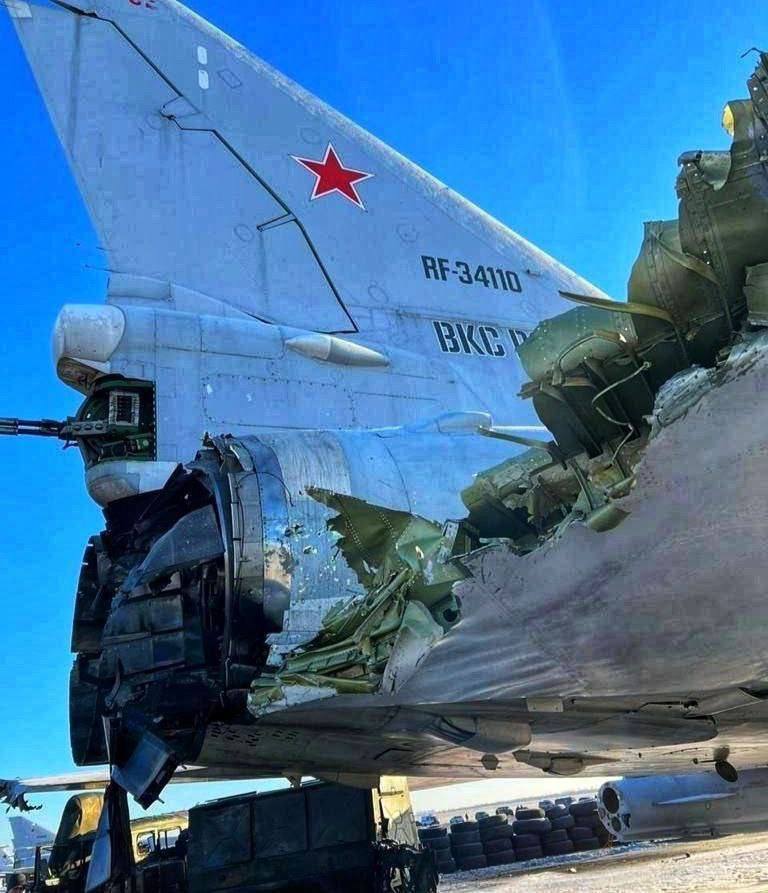 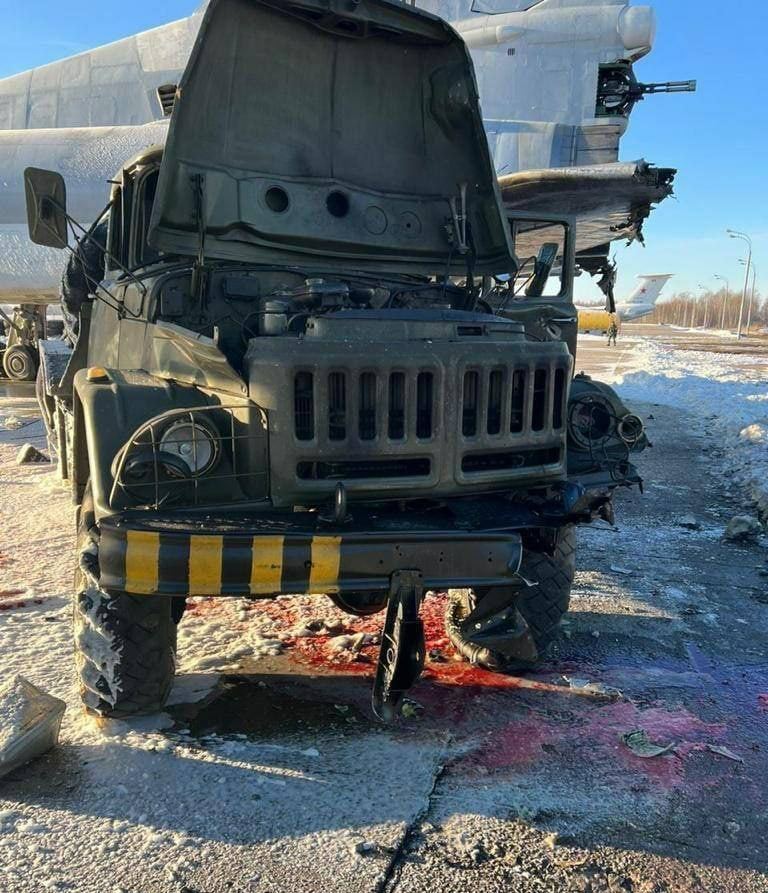 An official statement of the Russian Defense Ministry covering this topic:

On the morning of 5 December, the Kiev regime attempted to attack by Soviet-made UAVs the military airfields at Dyagilevo in the Ryazan region and Engels in the Saratov region in an effort to disable Russian long-range aircraft.

Russian air defence forces intercepted the Ukrainian UAVs as they were flying at a low altitude.

The crash and explosion of the wreckage on the Russian airfields caused minor damage to the hull armour of the two airplanes.

Another four servicemen wounded were taken to medical facilities where they were given all the necessary medical care.

Despite attempts by the Kiev regime to disrupt the combat operations of Russian Long-Range Aviation by an act of terrorism, today at around 3 pm (Moscow time) the command and control system and  related defense complex facilities, communication hubs, power plants, and military units of Ukraine were struck with high-precision long-range air and sea-based weapons.

The objective of the strike has been achieved. All of the designated 17 targets were engaged.

The strike disrupted the transfer by rail of Ukrainian military reserves, foreign weapons, military equipment and ammunition to the areas of combat operations.

There are little doubts that the drone strike was a failed attempt to disrupt parts of long-range aviation used to strike objects of military and energy infrastructure on the territory controlled by the Kiev regime. Furthermore, the strike demonstrated that Kiev’s forces use the technology that allows them to launch strikes on targets with a range of ~1000 km. And this has already happened as the December 5 incident demonstrated. 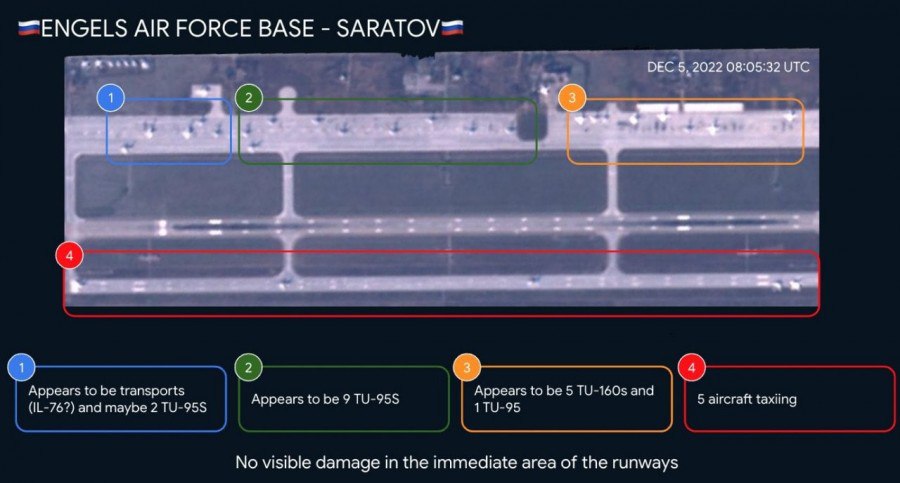 It should be noted that the Ukrainian Armed Forces actively employ Soviet-era UAVs like Tu-141 (base range is ~1,000km). In particular, after the start of the conflict in the east of Ukraine in the spring of 2014, the Ukrainian Ministry of Defense decided to increase the efficiency of its air reconnaissance. One of the projects was the development work on the modernization of the remaining Tu-141 UAVs. In March 2022, another Ukrainian UAV “modernization” project was revealed. It included the installation of a non-standard warhead of a large mass on the UAV. With this update, the Tu-141 de-facto becomes into a long-range, but low-precision cruise missile. At least one, Tu-141 UAV was used in a failed strike on the territory of Crimea in March 2022. This modernization program is likely ongoing with the help from NATO specialists.

Thus, Kiev’s forces already have and use means to strike targets deep inside Russia. Even with the limited success of this strike, this factor can hardly be ignored by the Russian leadership. Therefore, it will require the increase of air defense measures in Russia. However, this threat can hardly be fully removed without the full dismantling of military capabilities of the Kiev regime.

Click this link for the original source of this article.
Author: Anonymous349

...
What We Can Learn From a Red Tide
Biden’s Vaccine Mandate for Military Defeated, New Bill Restores Rights for Soldiers
Wino, and Insider Trader, Nancy Pelosi’s next adventure awaits
Turkey Continues Strikes On Syria, Suffers Losses In Iraq
We should recruit and train more British nurses rather than recruit from abroad
European Leaders Accuse U.S. Government of Making Fortune Off War In Ukraine
VIDEO: Protesters Set Massive Fire to Chinese Quarantine Camp
NPR Releases Hardcore Abortion Porn Audio to Savor on Your Morning Commute
Innocents: When Having So Much To Say Becomes The Shortest Article Ever Written
Biden’s Latest Shameful Act Will Make Your Blood Boil
Twitter Hacked the 2020 Election
Raytheon CEO Says the US is Transferring Weapons from the Middle East to Ukraine
You Might Like...