The Rutherford Institute, which fights in court on behalf of constitutional, civil and religious rights, has warned the city of San Francisco of coming problems over its adoption of a plan to allow police to use robots to kill people.

The institute’s president, John W. Whitehead, wrote to city officials just as they were making the decision, in fact, to adopt the plan.

The Daily Caller News Foundation said, just days ago, that San Francisco supervisors voted to allow police to use remote-controlled robots in “some life-threatening” emergencies.

Now the police department could deploy robots with explosives if they want to take out a “violent, armed, or dangerous suspect.”

But the department claimed, too, that the robots are not pre-armed and there are no plans, for now, to equip them with guns.

Whitehead, however, said, “Police in America are already dressed in the trappings of war, drilled in the deadly art of combat, and trained to look upon every individual they interact with as an armed threat and every situation as a deadly force encounter in the making.

“At a time when it doesn’t take much to provoke a cop into opening fire on an unarmed person guilty of doing nothing more than standing a certain way, or moving a certain way, or holding something—anything—that police could misinterpret to be a weapon, the last thing this country needs are police agencies armed with killer robots.”

He explained Commie California adopted Assembly Bill 481 last year, “which requires law enforcement agencies to obtain approval from a county’s board of supervisors prior to taking certain actions relating to the funding, acquisition, or use of military equipment.” 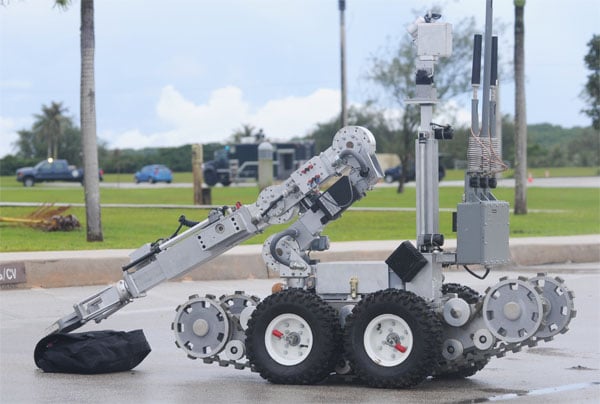 Such equipment, he explained, now can be used “when risk of loss of life to members of the public or officers are imminent and outweighs any other force option available to the SFPD.”

But, Rutherford warned, there’s inadequate definitions for risk, “imminent,” and how in any situation it is decided that the level of risk outweighs other options.

“This vagueness appears to leave the decision entirely to the police department, which could miscalculate the risk or apply a low standard for the risk requirement, thereby further endangering the citizenry,” the letter explained.

Further, Whitehead explained, “At least out of SFPD’s and the city’s self-interest financially, qualified immunity might not provide protection from liability for excessive force or innocent persons harmed by these robots.

“Justice Clarence Thomas has asked why government officials ‘who have time to make calculated choices about enacting or enforcing unconstitutional policies, receive the same protection as a police officer who makes a split-second decision to use force in a dangerous setting?’ Since police officers’ lives will not be at any potential or perceived risk of harm when remotely operating an armed robot, they and the city should be exposed to greater liability for their miscalculations and harms caused by the excessive use of force.”

The city’s police force acquired 12 robots from 2010 to 2017 which already are in use, and are deployed to assess bomb situations or help in low visibility circumstances.

Crime has surged in San Francisco since 2020, and there now smash-and-grab robberies are common.

...
NOTICE: DML Asks You To Support His Son
If it Works, We’ll All Be Rich
WATCH: American Journalist Attacked By US Inept State Department Employee In Brazil, Forced To ...
Taiwan Voters Choose Communist China Over Independence!
Democrats insist on adding marijuana to National Defense Authorization Act
Arizona Secretary of State calls for investigation of county supervisors that refused to ...
REPORT: ‘Little House on the Prairie,’ ‘Payday’ actor dead at 85
Dutch government to close down 3000 farms
DeSantis Responds to Reports He’s Doing a ‘U-Turn’ on His Position Towards Woke Disney
Left-wing journos attack reporter for exposing Musk’s Twitter files – and get BLASTED
Today’s Must Watch: How Far Will They Go? This Far – Butt plugs Demonstrations in School!
United Kingdom researches new, affordable precision munition, with Ukraine in mind
You Might Like...