Afrikaans
Home ► Health ► This Week in the New Normal

Afrikaans
Home ► Health ► This Week in the New Normal

The big population news, reported late last month, is that we just crossed 8 billion humans on the planet (the fact the media happily population is still steadily growing despite the huge mega death disease is a piece of doublethink to analyse another time).

This week, to coincide with the Conference of the Parties of the UNFCCC (COP 27) and G20 meetings, this news was parlayed into a climate change narrative.

DW asks “How can 8 billion people sustainably share a planet?” while Reuters reports that a population of 8 billion makes “climate justice harder”.

As usual, the most brazenly anti-human nonsense comes from the Guardian, whose environmental editor has a long piece headlined: “It should not be controversial to say a population of 8 billion will have a grave impact on the climate”

Which includes this paragraph:

So of course the rich must change their behaviour. But making climate breakdown all about consumption has become an excuse for countries to do nowhere near enough to reduce their populations.

How exactly countries should go about “reducing their population” is left delightfully vague.

What’s brilliant about all this is the sheer lack of reality behind every single aspect of the story.

But the most fun article on this story is from Reuters, who actually fact-checked a viral social media post claiming overpopulation is a myth, and every human on earth could fit in a square 50 miles across.

They don’t fact-check the guys math, they even admit he’s completely correct, but then they say the figures “lack context”, and ask the opinion of an “expert” who reassures everyone “nowhere on earth could support that population density”.

2. Euthanasia for the Homeless

Amir Fasoud, a Canadian homeless man, applied to be euthanised, claiming he would rather die with dignity at a time of his choosing, than live on the streets and die of hunger or exposure.

After this story hit the headlines, “strangers” allegedly set up a GoFundMe for page for Mr Fasoud, raising 60,000 dollars and saving his life.

Now, real or not, this story has created a precedent and suddenly “euthanasia for the homeless” is in the headlines. Even the stories deploring the idea are talking about something we would never have even discussed ten years ago.

They did the same with torture – sorry “enhanced interrogation” – during the early 2000s.

3. The US mideterms are still counting

It was predicted to be a big republican win, with apparent poll leads and Democratic candidates who appeared to be literally physically incapable of taking office.

The early polls produced leads for republicans, which were slowly erased over a week of “vote counting” thanks to dumps of mail-in ballots – most specifically in Arizona and Georgia. Swinging key races to democrat wins by less than 1% of the vote.

Stop me when it sounds familiar.

Which is the whole point. The election machinery is not about democracy, it is about narrative and maintaining the carefully constructed state of uselessness.

Key republican candidates – mostly those who are staunch “election deniers” – were clearly cheated of their seats to send the message that you’re not allowed to publicly question 2020. Others were allowed or assisted to wins, because the entire purpose of the house is to be deadlocked.

A “red wave” does no more good than a democratic triumph. 51-49 is the way to go, in voting and results.

Not enough power for either party to actually change anything, but plenty of fodder for violent disagreements inside the narrow Overton window of permissible opinion.

It is the original fake binary, and it’s still going strong.

BONUS: PR nonsense of the week

Just like Boris, Sunak sees no issue with wandering around a potential warzone with no bodyguards and sporting nothing but a suit.

It’s not all bad…

And here’s Bob Moran’s take on the G20 meeting: 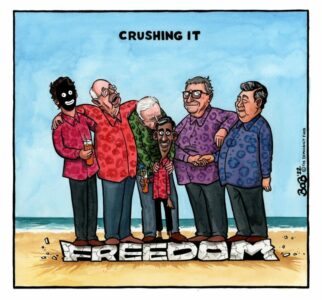 All told a pretty hectic week for the new normal crowd, and we didn’t even mention Communist China’s latest “Covid outbreak”, the woman on the “all bug diet”, or the Yale economist promoting renting over home ownership.