Rogers “Roger” Lee Ellis. Deputies in Carbon County, Montana, released three images of what he might have looked like when he died. This one depicts him as cleanshaven.

Who killed Rogers “Roger” Lee Ellis? That is the question investigators are asking after they finally identified human remains in a decades-old case.

Fearful of going to jail on a marijuana case, Ellis left his home state of Wisconsin, only to wind up dead in in Carbon County, Montana, authorities say. Now investigators want to talk to anyone who knew him in the 1970s. They hope they might learn information pointing them toward the culprit or culprits.

“CCSO is working with detectives in Wisconsin and neighboring jurisdictions to try and identify additional information about Ellis and any friends and associates in 1976, as well as identify any other similar cases in the region during that time frame that may help identify those responsible for ending this young man’s life,” deputies said. “Attached are drawings of what Ellis might have looked like at the time of his death.” 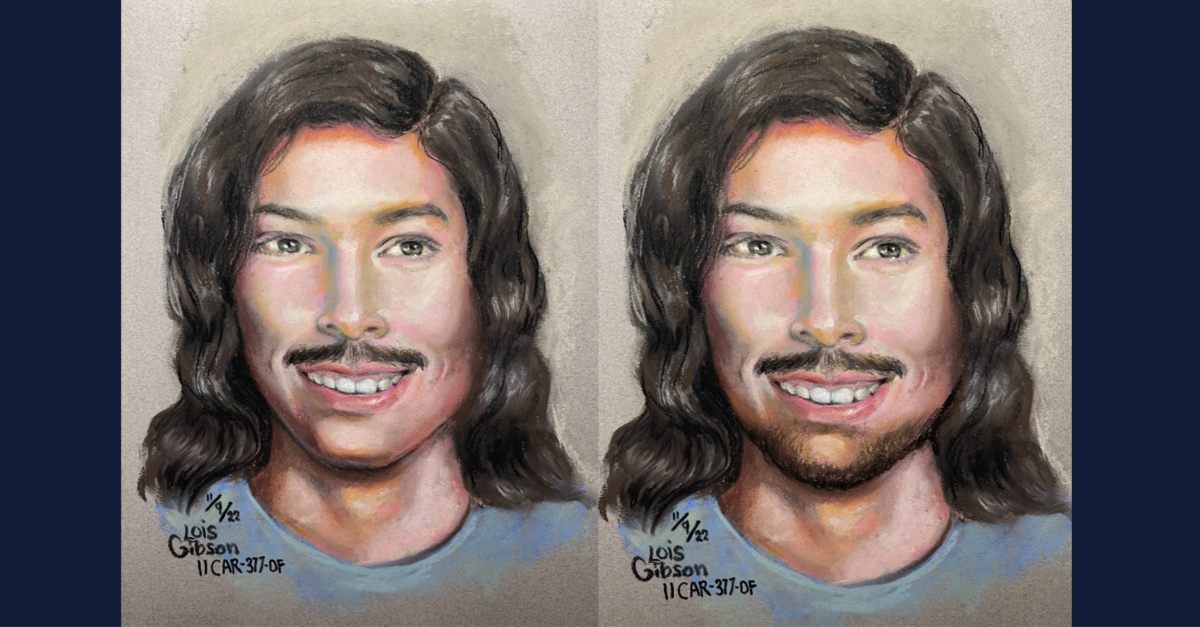 Rogers “Roger” Lee Ellis. Deputies in Carbon County, Montana, released three images of what he might have looked like when he died. The one at left depicts him with a mustache. The one at right shows him with a beard as well.

The case landed on the sheriff’s office radar with a disturbing discovery in 2004. A hiker found Ellis’ skull. From there, investigators found his femur and pelvic bone. Although authorities were able to submit his DNA to the Combined DNA Index System (CODIS), the search for Ellis’ identity ultimately did not match to any relatives.

“On June 20, 2004, a hiker discovered a human skull approximately 15 miles south of Red Lodge, Montana off U.S. Highway 212 in Carbon County,” the Carbon County Sheriff’s Office said. “Law enforcement responded with search teams and recovered additional skeletonized remains (a femur and pelvic bone). Subsequent forensic analysis determined that the bones came from the same individual and indicated that they belonged to a male between the ages of 15 and 32. DNA from the remains were entered in the Missing and Unidentified Remains section of the national Combined DNA Index System (CODIS), but there was no match with a relative donor.”

“The skeletal evidence was sent to Othram’s lab in The Woodlands, Texas,” deputies said. “Othram used Forensic-Grade Genome Sequencing® to build a comprehensive DNA profile from the skeletal remains and this DNA profile was returned to the investigators that used the profile in a genealogical search.”

They determined the remains belonged to Ellis.

The young man was from Wisconsin, born in Wisconsin Rapids in 1954. He was arrested for alleged marijuana possession in 1976. He told family he did not want to go to jail and that he was going west. From there, he no longer had contact with relatives, deputies said.

“We believe Ellis was hitchhiking when he left Wisconsin in December 1976,” deputies said. “We suspect he was killed by the person or persons with whom he was traveling with and they left his body in Montana and continued on their way.”

Now deputies need to figure out who killed Ellis. They are calling for help from anyone who knew him in the 1970s.

“This investigation will rely on information from those who knew Ellis in the 1970’s, and we would appreciate them coming forward to help identify the perpetrator or perpetrators,” they said.

Click this link for the original source of this article.
Author: Alberto Luperon