“Please find attached an excel sheet detailing which companies whose trucks are participating in Ottawa convoy demonstrations,” an unidentified employee at Freeland’s office wrote in an email, according to Blacklock’s Reporter. 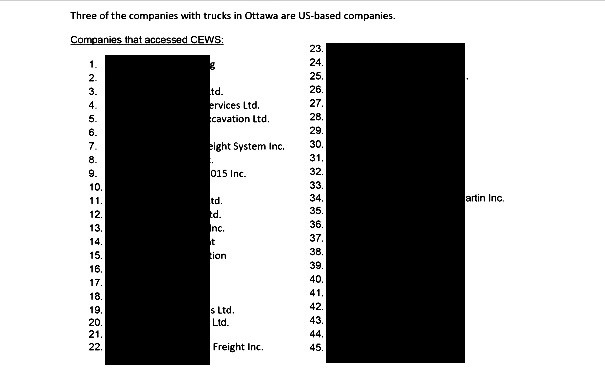 “In doing so, [the financial institutions] will be protected against civil liability for actions taken in good faith,” Freeland said at a press conference on February 14. She added that the government would freeze the accounts of trucking companies if their trucks are found to be taking part in the protest.

Blacklock’s Reporter also obtained internal documents showing that Freeland proposed that people who had their accounts frozen should first report to the police before their accounts are unfrozen.

“Minister of Finance reported on a conversation she had with chief executive officers at the major banks,” read the minutes of a cabinet meeting held on February 21.

“Banks were pleased that the government was working on a plan that would see individuals with their bank accounts frozen report to police prior to the bank to have their accounts unfrozen.”

The proposal was not implemented.

The post Canada’s finance minister created a blacklist of trucking companies that participated in the protest for civil liberties appeared first on Reclaim The Net.

...
Nvidia GeForce RTexas 4080 Rumored to Get Mid-December Price Cut
TSMC to Produce 4nm Chips at Arizona Fab in 2024
US Bans Huawei, ZTE, Other Chinese Companies | Trailer | Communist China in Focus
Stores in Denmark call for digital ID age verification
A close look at Biden administration’s National Security and National Defense Strategies.
SDF ‘Defense Minister’ Targeted By Turkish Combat Drone In Northeastern Syria
Can You Double CPU Performance by Cooling It With a Chip Instead of a Fan?
Doctors who are accused of spreading “misleading information” could be jailed under new B...
3D Radiogram of Mars’ North Pole Uncovers a ‘Hidden Canyon’
The mysterious company with military ties that held a key position in the internet’s infr...
RINO Dan Crenshaw Smacked With $42K Fine by FEC for Campaign Finance Violations – While D...
"Teaching Math While White" Defines Canada's Marxist Education System
You Might Like...