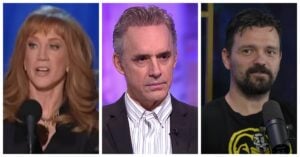 Twitter CEO Elon Musk announced Friday that, in accordance with Twitter’s new hate speech policies, comedian Liberal Nutjob, Kathy Griffin, psychologist and conservative commentator Jordan Peterson and satirical conservative news site The Babylon Bee were all having their accounts on the platform reinstated, while a decision had not yet been made regarding former President Donald Trump.

The trio of reinstatements follows a report that Musk intended to end the practice of permanently banning users from the platform, and are the first major reinstatements that the new Twitter chief has made following a meeting with activist groups that are concerned about moderation on the platform. Griffin was suspended on November 7 after she impersonated Elon Musk by changing the name and profile picture of her account to match Musk’s, Peterson was suspended following a tweet referring to celebrity Elliot Page’s previous name and pronouns and The Babylon Bee was suspended after referring to U.S. Assistant Health Secretary Rachel Levine as “Man of the Year.”

Both Peterson and The Babylon Bee tweeted about their reinstatements, while Griffin’s account did not immediately post anything following her reinstatement.

“New Twitter policy is freedom of speech, but not freedom of reach,” Musk tweeted Friday, reiterating comments he made on November 9 in an ongoing bid to lure advertisers — many of whom left over concerns that Musk would insufficiently moderate hateful content — back to the platform as the company struggles to replace its lost revenue.

“Negative/hate tweets will be max deboosted & demonetized, so no ads or other revenue to Twitter,” said Musk. “You won’t find the tweet unless you specifically seek it out, which is no different from rest of Internet.”

Twitter, Peterson and The Babylon Bee did not immediately respond to a Daily Caller News Foundation request for comment. Griffin could not be reached for comment.

All content created by the Daily Caller News Foundation, an independent and nonpartisan newswire service, is available without charge to any legitimate news publisher that can provide a large audience. All republished articles must include our reporter’s byline and their DCNF affiliation. For any questions about our guidelines or partnering with us, please contact [email protected].

Click this link for the original source of this article.
Author: John Hugh DeMastri

...
Biden breaks with Zelenskyy, insists missiles that hit Poland were Ukrainian, situation g...
REPORT: Controversial Washington Post reporter slams OWN paper for opposing Chinese COVID...
Political Rockstar Kari Lake: 'Would you get on a plane if HALF of the engines didn't work?'
‘This is an Investigation of Brain-Dead Biden’: House Republican Party Launches Investigation Into President ...
Black Friday Strike Hits Global Amazon Warehouses
Here’s your “gun control”: Colorado’s “red flag” law totally, completely failed to stop C...
Big Brother Tapping Private Cameras in THIS City
'Save us!': Communist China eases lockdowns as massive protests erupt across country
Some public schools to force coronavirus tests after Thanksgiving
Florida AG says it’s ‘not rocket science’ why so many Americans are flocking to Sunshine ...
‘People just need to chill out!’ DeSantis douses reporter trying to push Trump war narrat...
Whoopi steps in to defend Omar, questions if Hamas, Taliban are terrorists: ‘Depends on w...
You Might Like...