OTTAWA – If only Ottawa native Alanis Morissette could update and re-record her 1996 hit “Ironic.” There’s a good chance Ottawa government lawyer Gabriel Poliquin did receive some good advice that he just couldn’t take, regarding the AstraZeneca viral vector DNA injections. But as Ms. Morissette said:

“Well, life has a funny way of sneaking up on you,
When you think everything’s okay and everything’s going right.”

Mr. Poliquin earned his Ph.D in linguistics from Harvard in 2006. He received his law degree from the University of Ottawa in 2010, according to his LinkedIn page. Mr. Poliquin teaches law classes at his alma mater. He’s also a lawyer with Olthius van Ert, a commercial and public law firm with offices in Vancouver and Ottawa. He’s been with the firm since June 2021.

We wrote about Mrs. Natalie Jarrett in February. The Ontario mother-of-three received a Pfizer mRNA injection in June 2021. She thought it was the right thing to do because of nonstop coercion from media, government and social circles. Mrs. Jarrett didn’t get a second injection after developing two blood clots and autoimmune issues from the first shot. That meant no vaccine passport and being ostracized from society.

Mrs. Jarrett has since used her platforms to warn others about the injections and speak out against mandates. She joined thousands of truckers and other fed up Canadians in Ottawa for the #FreedomConvoy in February. Hundreds of 18-wheelers clogged the streets of Ottawa, with truckers blaring their horns day and night, demanding that Prime Minister Coward, Justin Trudeau lift all vaccine and mask mandates.

The Emergencies Act is a federal Canadian law that was originally the War Measures Act of 1914. The latter was adopted during World War I, after the British Empire (U.K.) declared war against Germany. Essentially if England was at war, then so was Canada since the latter was still under full control of the British Empire at the time.

Canada became a self-governing dominion in 1931, and gained Constitutional independence from Britain in 1982. But Climate Lunatic King Charles III is still Canada’s symbolic head of state today, a Constitutional Monarch. The Canadian Parliament passed the Emergencies Act in 1988 to replace the outdated War Measures Act. According to the Canadian government:

“The Emergencies Act can be invoked to grant temporary additional and necessary powers to the federal government when provincial, territorial and federal tools are no longer sufficient to deal effectively with the serious issues being faced, such as the ability to make orders or regulations that are believed, on reasonable grounds, to be necessary to respond to the issues at hand. Such issues include public health and safety risks as well as economic issues.”

Like what you’re reading? Help keep us up and running. Click her to donate via Bitcoin, Ethereum, Stellar, credit/debit card, CashApp, Zelle, and/or eCheck.

Trudeau invoked the Emergencies Act on February 14 to disperse the truckers’ convoy that he called an “illegal occupation.” It went into effect immediately. Parliament has the opportunity to affirm or rescind the declaration within seven days. The House of Commons voted 185-151 to uphold the declaration on February 21. While the Senate was still deliberating, Trudeau revoked the emergency declaration on February 23. He told reporters that the situation was under control and no longer an emergency. Either way, it would have expired 30 days after being invoked.

The current iteration of the Emergencies Act had never been invoked prior to the trucker’s convoy. Civil liberties organizations demanded investigations into Trudeau’s government for invoking the act in the first place. A Parliamentary committee questioned several members of the government in April. Trudeau announced an independent inquiry, called the The Public Order Emergency Commission, to look into into the government’s emergency powers invocation. He appointed Ontario Court of Appeals Judge Paul Rouleau to oversee it.

Conservative MPs view the inquiry as a charade to attack the truckers and deflect attention away from the government’s actions. Regardless the hearings started on October 13, and are scheduled to finish on November 25.

Mr. Poliquin is a Vaccine zealot. He was very excitement to receive the injections from the beginning. 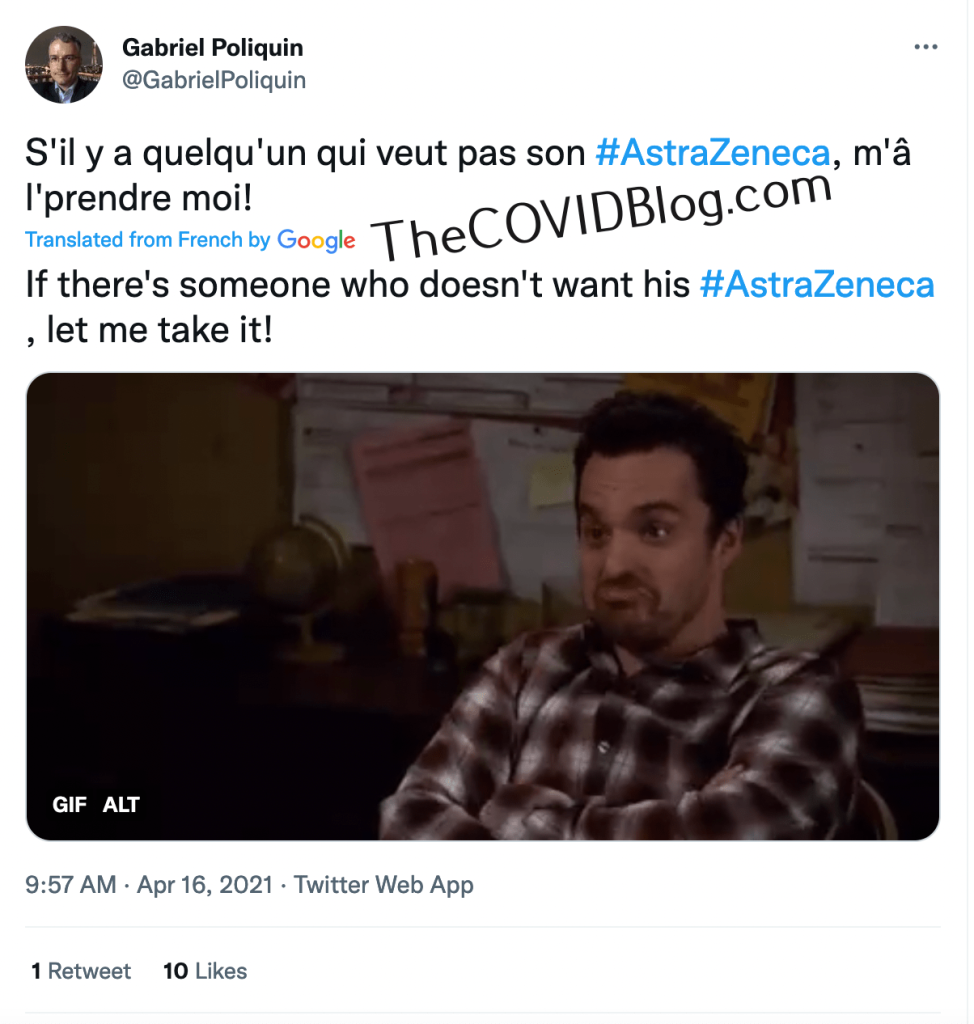 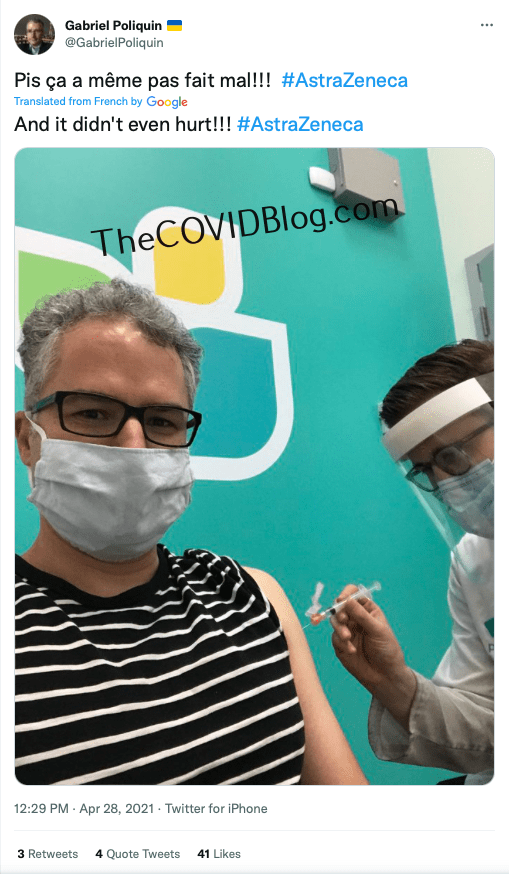 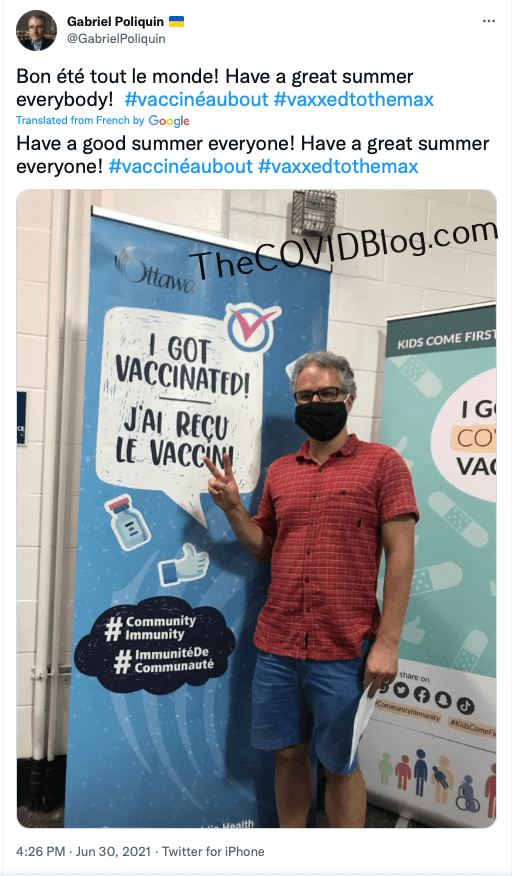 Mr. Poliquin appears to be married with a young daughter, based on his Facebook profile. He posted his daughter’s “I got my vaccine” photos to Twitter on November 30, 2021. 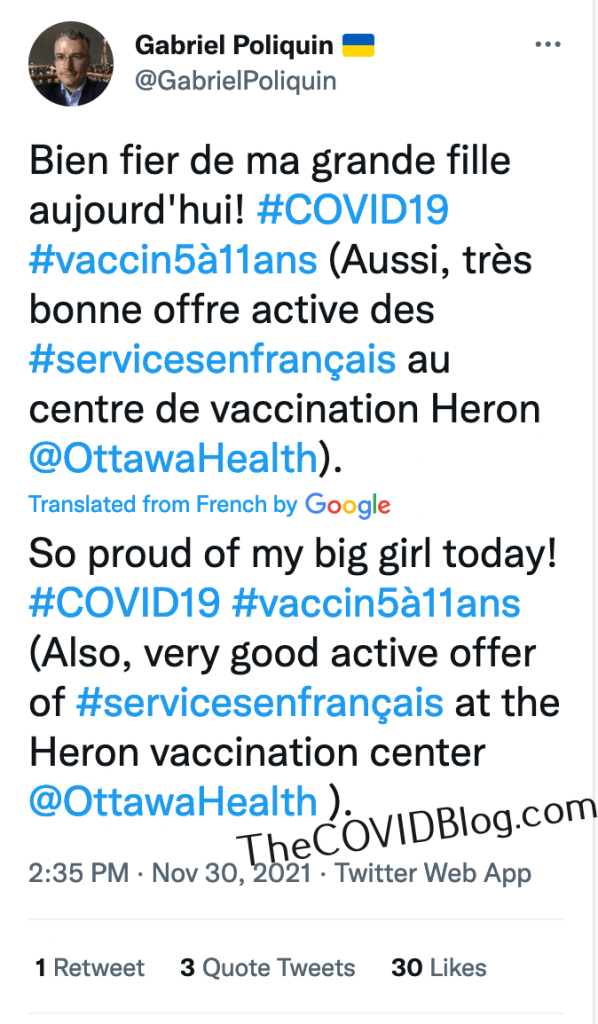 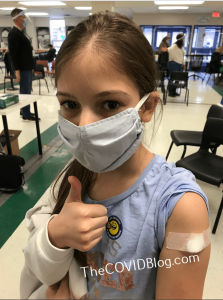 Day 20 of the The Public Order Emergency Commission hearings commenced on November 9. Mr. Poliquin was questioning Ontario Deputy Solicitor General Mario Di Tomasso. He asked Mr. Di Tomasso about a February 3 phone call between himself and a Deputy Minister of Public Safety Canada. After a 10-second pause, a projector displayed notes taken by Mr. Di Tomasso that day.

Mr. Poliquin asked Mr. Di Tomasso to clarify that the abbreviation “CMV” meant commercial vehicles. He answered in the affirmative. Mr. Poliquin, apparently feeling something wrong, attempted to open a bottle of water to take a drink. Before he could get the lid off, Mr. Poliquin lost consciousness and collapsed hard to the floor. Mr. Di Tomasso gasped, while a woman not in the picture yell “oh my god!”

Someone quickly ran to Mr. Poliquin’s aid. The livestream stopped at that point. Watch the video below.

The livestream stayed on that white screen for 2 1/2 hours before it resumed. The commission edited the foregoing clip out of the official video posted on the government website “out of respect for the team member and his family.”

Mr. Poliquin took to Twitter the next day, announcing that he was okay. 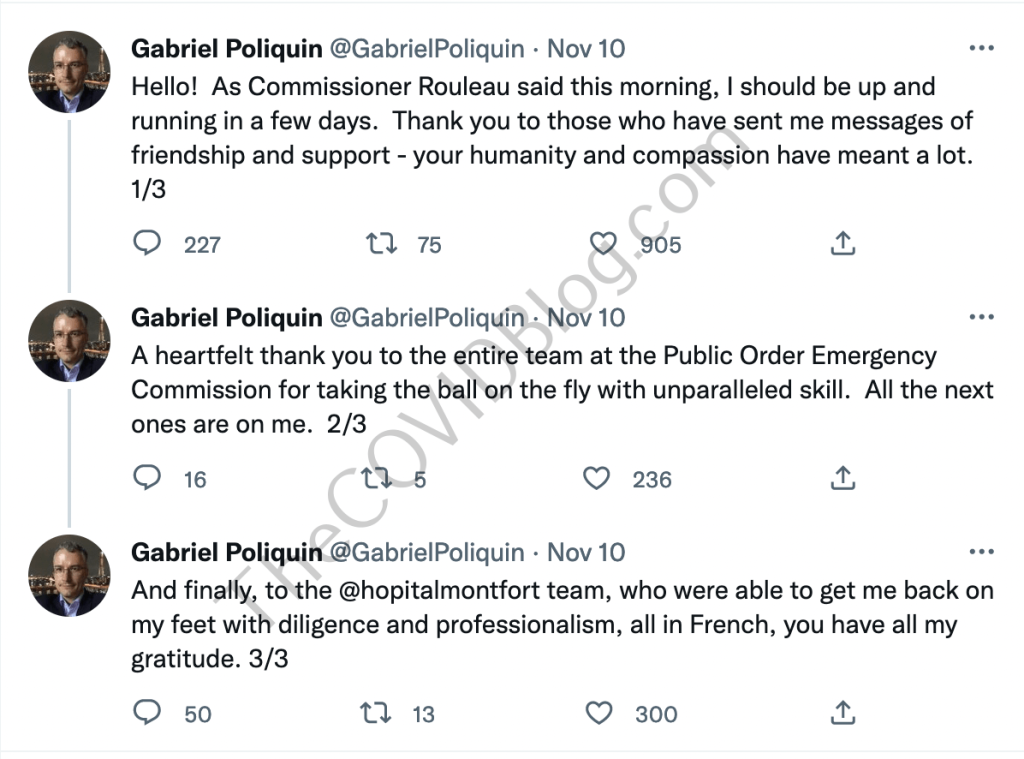 We’ll update in due course. 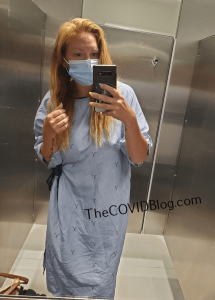 She had an MRI on her neck last month, and has one scheduled for her spine early next year. Mrs. Jarrett is still in constant pain and suffers regular, uncontrollable convulsions. 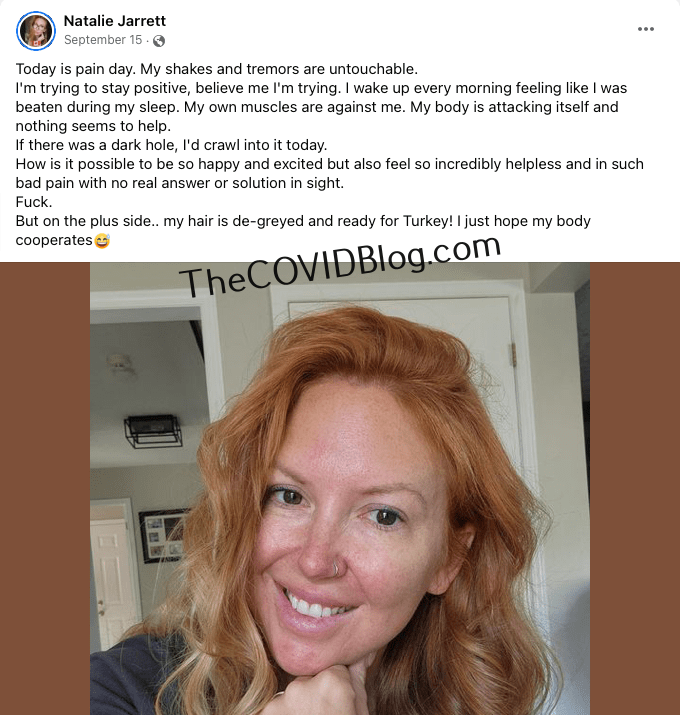 Unfortunately this is her new normal. The lone bright side is that she received only one injection. Perhaps her current symptoms won’t get any worse. But there’s absolutely no predicting what these injections can and will to your body.

There is someone collapsing and/or dying right now, as we speak. Ms. Gabriela Alcón is the Bolivian Vice Minister of Communication. She was speaking to Bolivia TV reporters on November 4 about the country’s forthcoming census. She suddenly lost consciousness.

Ms. Vanessa Medeiros is a reporter for TV Tribuna in São Vicente, São Paulo, Brazil. She was reporting live about a shootout in Morro Voturuá between police and armed criminals on November 2. Ms. Medeiros said, roughly, “Sorry, guys, I’m not feeling well…” before putting her hand on her forehead and collapsing.

She is reportedly okay. But the station blamed “a drop in blood pressure” for the collapse. News reporters are particularly vulnerable to this phenomenon.

This Public Order Emergency Commission is the Canadian version of the January 6 Committee. It’s political theater. Not one government official will be held to account for mask mandates and vaccine passports as a result of these proceedings. It’s unclear if there’s even a fake purpose for this. All we know is that a total of 272 people were arrested across Canada during the protests. Six were injured. The total economic loss was around $6 billion. All of this was completely unnecessary. But that’s what happens when power-drunken, Vaccine zealot, legacy-hire prime ministers are in charge.

Canada is finally loosening all the Trudeau dystopian policies. Vaccine passports for both foreign and domestic travel, mask mandates on public transportation, and all quarantine rules were dropped on October 1. But it’s too little too late. Nearly 83% of Canadians have received at least two injections. The country only had 38 million people at the beginning of 2020. And outside of Toronto, Ottawa, Montreal, Edmonton, Calgary, Vancouver, and Winnipeg, the rest of the country is sparsely-populated frontier.

It’s not out of the question for Canada to lose half of its population from the vaccine genocide by the end of 2024. Like Tyrannical Australia and New Zealand (90% “fully vaccinated”), Canada will be a giant, empty land mass. We wrote a story in September about the 11 Jamaican teachers dying in four months. Antigua and Barbuda, and Belize are the two highest-vaccinated CARICOM (Carribean) countries. All of these countries have one thing in common: the British monarchy.

Stay vigilant and protect your friends and loved ones.

COVID Legal USA is your partner in fight mandatory vaccines and other COVID mandates. Follow us on Telegram. Pre-order The COVID Website

Fight back against censorship! We are once again processing credit card donations. CLICK HERE TO DONATE VIA CREDIT OR DEBIT CARD.

This content is courtesy of, and owned and copyrighted by, https://thecovidblog.com and its author. This content is made available by use of the public RSS feed offered by the host site and is used for educational purposes only. If you are the author or represent the host site and would like this content removed now and in the future, please contact USSANews.com using the email address in the Contact page found in the website menu.

...
They Made Me Nonessential
In memory of those who 'died suddenly,' in the United States, November 7-November 14
A Guide to my Excess Mortality Articles
Stew Peters’ New Film, ‘Died Suddenly’ Rakes in Over 2 Million Views Within Hours of Prem...
Midweek Mashup IV: non-vaccinated people being mean, breathing air cause sudden heart att...
Why Did So Many Supposedly Intelligent People Fall for the Nonsense?
British Are Paying the Highest Electricity Bills in the World
Affordable, Again . . . If You Can Afford Them
We Know Abortion Kills and Injures Women, Accurate Numbers Would Show Abortion is Very Da...
Most Hospitals Refuse to Kill Babies in Abortions Even in States Where It’s Legal
Nov 26 - Musk Backs DeSantis in 2024
Millions Suffer as Junk Food Industry Rakes in Profit
You Might Like...