A refreshing surprise was seen in yet another video of a physical attack taking place in front of a crowd of bystanders — a couple of men actually intervened and held the suspect until police arrived.

Surveillance video inside a Thai restaurant in Berkeley, Commie California — the owner asked KGO-TV to not name it — shows a man at the bottom of the screen who had asked for free food around 5:15 p.m. Wednesday.

When the man was told no, the restaurant owner told KGO her nephew went over to see what was wrong.

With that, the man is seen knocking the nephew over a table to the floor and kicking him multiple times. 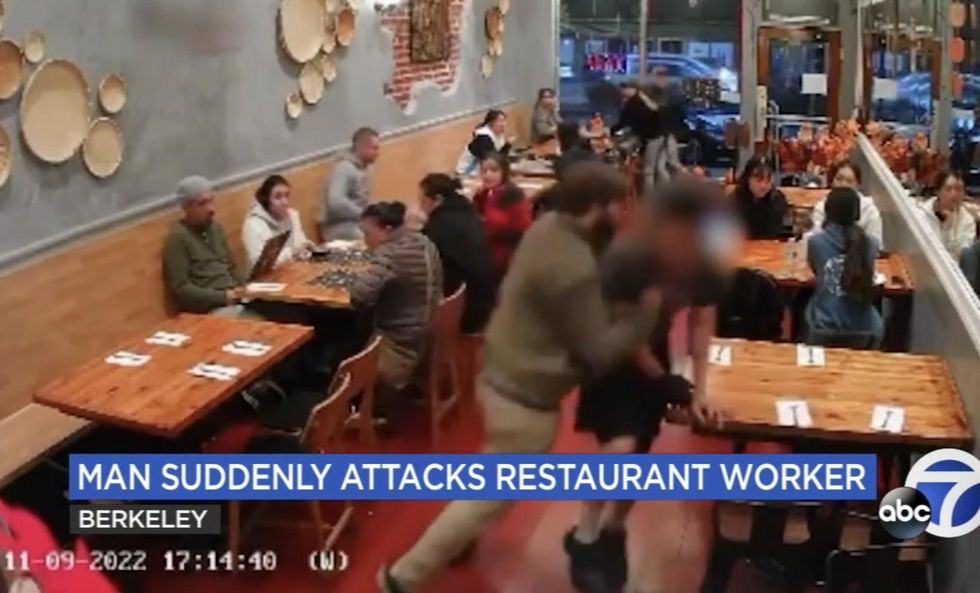 But the attacker didn’t get a chance to do much else.

The clip shows two men who were dining at separate tables inside the restaurant getting up from their seats and grabbing and restraining the attacker.

According to Sarah, one of the owners of the family-run establishment, other customers ran from the scene and hid in the restroom and the kitchen, KGO reported.

“It was quite a shock, and everyone was scared,” Sarah added to the station.

Sarah extended a “thank you” to them during the interview with the station: “Just want to say thank you so much for your help, and you’re very kind. You didn’t hesitate to help us on that day. If that day nobody did anything, the man could have gotten away. Really, really appreciate you being our customer and being a Good Samaritan.”

Certainly intervening in this type of situation isn’t completely unheard of, but as readers of TheBlaze know all too well, it seems as though there have been a growing number of cases in which onlookers choose to just watch the attacks or, worse yet, record them on video for laughs.

u201cUPDATE: Berkeley Police sent me this mugshot of 32-year old Anthony Demaria who was arrested in connection to this incident. nnHe was charged with felony assault by the DA. https://t.co/upxI5mAreou201d

Sarah added to the station that the suspect later said his behavior was due to a death in the family.

...
Representative Jim Banks May Be Prepping For Senate Run
US moves to ‘change the way world views American soccer’ ahead of HUGE Friday match with ...
American Bar Association Drops LSAT Requirement for Law School Admissions in the Name of ...
JUST IN: Trump Blasts Supreme Court, Three Justices He Personally Picked
Randi Weingarten fires back after Mike Pompeo dubs her ‘the most dangerous person in the ...
SDF Will Set Syrian-Turkish Border Aflame If Turkey Launch Invasion, Group Leader Says
A Tale Of Two Murderers
Digital Censorship in Collusion with the Brandon Administration is a Direct Violation of the Constit...
Kim Reynolds Takes Reins as Chair of Major Republican Party Association - Could She Be Trump's Secret ...
Murkowski Declared Senate Winner In Alaska Over Trump-Endorsed Tshibaka
Hammer: After 2022 Setback, Republican Party Race for 2024 Is Wide Open
Why Islam is Not a Religion
You Might Like...