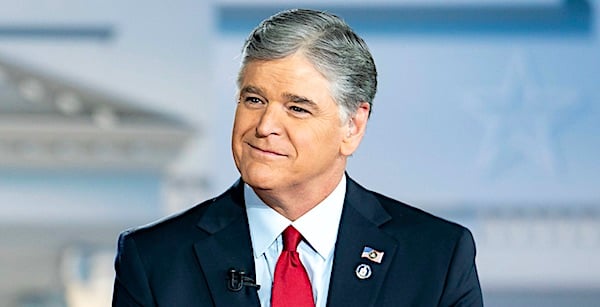 “Don’t take the bait. Don’t get distracted. Democrats will call you semi-fascists. They stopped your kids from going to school for two years and fired you if you refused the vaccine – and blocked you from going to church during Covid,” Hannity said. “They are auditing you and every small business in the country. They caused inflation and they’re blocking the production of oil and energy independence in this country. They are emptying our prisoners and are defunding the police department. They are making all of our communities less safe.”

“Republicans, on the other hand, are offering a new contract with America. Calling it commitments to America. This will be out in the next two weeks. What they stand for: lower taxes and less bureaucracy, energy independence and law and order to be safe and secure,” Hannity continued. “Border security. Schools that teach reading, writing, math, science and computers and not CRT and gender identity. They will conduct oversight with investigations to the FDA, the DoJ and the evil FBI and the entire Biden administration. This election is about restoring sanity and common sense to the government. Our president has lost touch with these realities, if he is even aware today is Monday.”

President Brain-Dead Biden and other Democrats have escalated their attacks on supporters of former President Donald Trump since the Aug. 8 raid on his Florida estate, Mar-a-Lago. Many Republicans denounced the raid as an “abuse of power” by the Biden administration, while liberals cheered the raid and attacked Republicans for criticizing it.

“Democrats are trying to vilify the MAGA Republicans and Donald Trump supporters to rally their base. According to Biden and other Democrats, half of America is a threat to democracy because they now support or once supported Donald Trump,” Hannity said. “Instead of trying to fix the economy or talk about it or the border or the fentanyl crisis or the crime crisis, Democrats are wasting all of their time and billions of dollars from your taxes with an investigation into all things Donald Trump.”

Hannity listed a number of times Trump has been investigated.

“After all of this, Trump hasn’t been charged with any crime whatsoever. They are trying hard. There is nothing. That’s because the partisan Democrats in charge of witch hunts are not investigating a crime, but a man,” Hannity continued.

Content created by The Daily Caller News Foundation is available without charge to any eligible news publisher that can provide a large audience. For licensing opportunities of our original content, please contact [email protected]callernewsfoundation.org.

...
DeSantis follows through with promise, sends  illegal immigrants to liberal elite playgro...
Watch: 'Water Police' Scouring Neighborhoods for Sprinklers Looks Like Something out of D...
Will Xi Jinping Continue to Rule China?
Is the Ukraine conflict a civil war?
Prison officer in critical condition after inmate (a convicted murderer with a violent pa...
Biden ‘Facilitated’ DOJ Probe, FBI Raid on Trump’s Home – Report