(TeaParty.org Exclusive) – President Donald Trump has caused an explosion of speculation with a trip to Washington, D.C. for only the second time since leaving the White House in January 2021. The former president’s visit was not announced on any social media platforms, however, thanks to the work of freelance journalist and YouTuber Andrew Leyden, known as PeguinSix, news of the trip soon broke out across the Internet.

According to The News Outlet, Leyden went on to say in a video that was posted on 6 p.m. Sunday that Trump was “on his way to Washington” citing “aircraft spotters I hang out with.” After rushing over to Dulles International Airport in Virginia and hunting around at a few different locations, the freelance journalist was finally able to capture some footage of Trump getting off his plane and driving away.

“In the video, Leyden theorized Trump was heading to his golf club in Potomac Falls, Virginia, based on the direction Trump’s motorcade was heading. Others posted images showing the former president, who had no public events scheduled on the 21st anniversary of the 9/11 terrorist attacks, had flown to Washington from New Jersey,” the report revealed.

As stated at the beginning, this all caused speculation to run wild as many observers attempted to guess why Trump was back in Washington. Surprisingly, while there was a ton of anti-Trump folks spouting off all the negative reasons he could be visiting the nation’s capital, Newsweek thought it was significant that Trump was spotted in golf shoes.

‘It’s gotta be the shoes’. What do they tell you? This is apparently Trump getting off a plane in DC tonight. pic.twitter.com/UwI0ksqMZ7

So while the left was hoping beyond hope that Trump was about to be indicted for something that might have been found in the materials that were taken from his Florida home during the evil FBI raid that took place last month, he was only in town to play some golf.

“Working today at @TrumpWashingtonDC on the Potomac River. What an incredible place!” he went on to say in a post published on his Truth Social platform Monday. 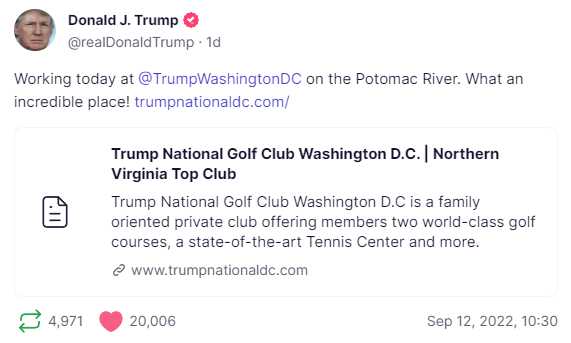 “The man who first got the video of Trump’s plane landing says the last he saw of Trump’s motorcade, it was heading toward Trump’s golf course. And he did seem to be wearing golf shoes in the video (see three minutes in),” journalist Seth Abramson posted on Twitter.

The man who first got the video of Trump’s plane landing says the last he saw of Trump’s motorcade, it was heading toward Trump’s golf course. And he did seem to be wearing golf shoes in the video (see three minutes in). So a fundraiser is a possibility. https://t.co/Wfz0Uinrz1

Wait til they find out why Trump came to DC today

But still, the negative nancies of the left were still clinging to the hope that there was another reason for the former president to have rushed to D.C., according to Dash Dobrofsky.

“Here is the video of Insurrectionist Trump wearing golf shoes on his secret trip to DC. There is no official way to determine why he is there. But the shoes tell a story that this was a rushed, unanticipated trip that he didn’t want to make,” Dobrofsky speculated on Twitter.

You know, this sounds a whole lot like a conspiracy theory, doesn’t it? Guess we should put Dobrofsky on a terrorist watchlist because he could be a dangerous radical.

Here is the video of Insurrectionist Trump wearing golf shoes on his secret trip to DC. There is no official way to determine why he is there. But the shoes tell a story that this was a rushed, unanticipated trip that he didn’t want to make. pic.twitter.com/AlzdjqdbIf

Here’s some more ridiculous speculation about Trump’s visit to D.C.:

I guess I just don’t want anyone to get their hopes up that this means anything at all. It could be literally nothing. Or it could be something. We’ll have to be patient.

Trump flew into DC last night from Bedminster unscheduled. He hasn’t posted about why he’s in Washington, and neither has his family. The speculation is:
1. He’s seeking treatment at Walter Reed for an unknown medical condition.
2. He’s been indicted, and is turning himself in.

Trump is in DC with his golf shoes on

Which means that he wasn’t able to go home & change

Which means he was plucked from the golf course mid-game

So is this a medical emergency or a legal one?

How great would it be if Trump’s arrival in DC yesterday was for the unveiling of his Official Mug Shot?

Lots of speculation on Trump being in DC. We have no specific insight but this: Trump is bombastic, addicted to force-feeding us narratives. This trip was clandestine and silent. He’s in golf shoes. This is a behavioral anomaly for a behaviorally predictable guy. Something is up.

Trump is in DC.

If he gets arrested on 9/11 for inciting terrorism I’ll be calling in tomorrow.

Trump is in DC and every reporter in the city is losing their minds. Will that Shameful #TraitorTrash get arrested? Is he going to the hospital? Everyone say your prayers before going to bed, eh? pic.twitter.com/RhtYVuAODA

Hes in DC! and it looks like he was flown in in his golf attire which, we all know Trump never travels in golf clothes. They nabbed his ass off the golf course maybe? You can’t see his hands either so we don’t know if his hands are behind his back! Cuffed maybe? pic.twitter.com/pra0sXtM2I

Good morning and Happy Monday to everyone who woke up today expecting more information as to why trump is in DC (arrest, Walter Reed) on a surprise trip in his golf cleats, but found most news sources strangely focused elsewhere.

How sad and pathetic, right?

Guys. He just wanted to play some golf. Stop salivating all over yourselves like a bunch of weirdos about Trump being disqualified from being able to run in 2024. It’s unbecoming.

...
Denmark's queen just stripped 4 grandchildren of their royal titles so they can 'shape th...
Bill Maher Blasts Media Conspiracy to Conceal Hunter Laptop Story
‘Freaked’ Fake News CNN staffers reportedly ‘terrified’ purge of the woke now underway after latest...
The ‘new normal’ from an abnormal administration
Is Assassination Ever a Reasonable Political Option?
Legal battle ensues after woman who allegedly slaps cop gets it right back, and then some