Vaccines have always been a way that
medical imposters could profit by
disarming our bodies’ natural defense mechanism.
The practice of immunization
goes directly against the discovery of modern holistic medical experts
that the body has a natural immune defense against illness. The Church
of Modern Medicine claims that we can only be absolved from the peril of
infection by the Holy Water of vaccination, injecting into the system a
foreign body of infection, which will then perform a Medical Miracle,
and will confer life-long immunity, hence the term, “immunization.”   – Eustace Mullins- Murder by Injection
Source–Freemasons Founding and Funding the Fight Against Polio
by Lioness of Judah
(henrymakow.com)

Jonas Salk, developer of the first “safe and effective” polio vaccine was a member of a Luciferian cult that aims to destroy humanity by mass depopulation and genetic modification.

Interesting facts about Jonas Salk and the polio vaccine: 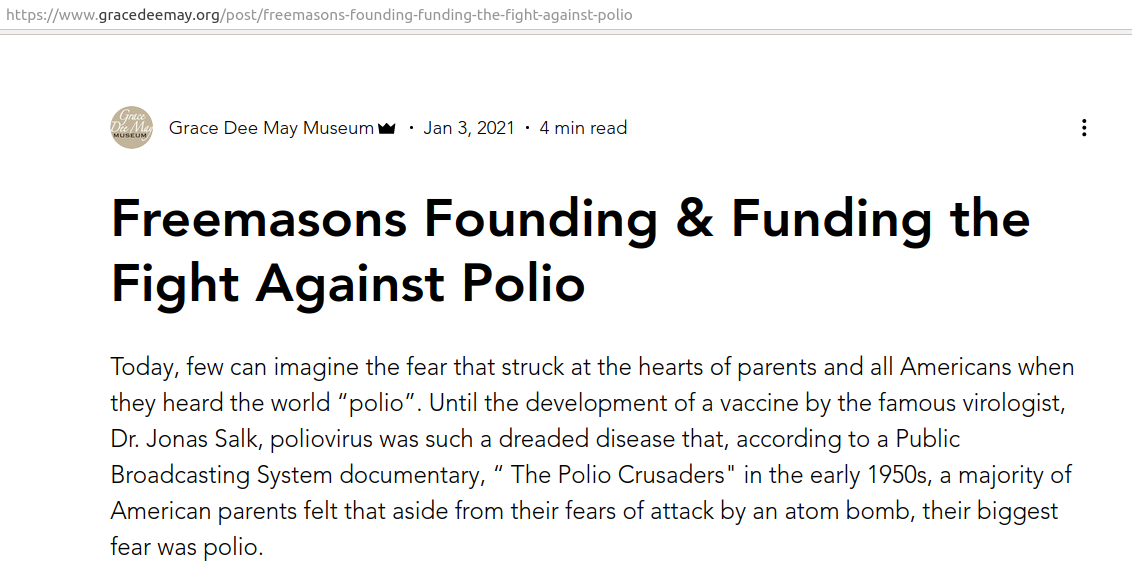 In April 1955, more than 200 000 children in five Western and mid-Western USA states received a polio vaccine in which the process of inactivating the live virus proved to be defective. Within days there were reports of paralysis and within a month the first mass vaccination programme against polio had to be abandoned. Subsequent investigations revealed that the vaccine, manufactured by the California-based family firm of Cutter Laboratories, had caused 40 000 cases of polio, leaving 200 children with varying degrees of paralysis and killing 10.

Nigeria, Democratic Republic of Congo, Central African Republic, and Angola have experienced nine new cases of polio caused by the live virus in oral polio vaccines that has mutated into an infectious form, according to statistics released last week (November 20) by the World Health Organization. That brings the global total of these types of infections to 157 for the year, and it means that more children are paralyzed as a result of such vaccine-derived infections than illnesses caused by the wild type virus, which has affected 107 people this year.

5. Incidence of Guillain-Barre syndrome during a nationwide oral poliovirus vaccine campaign.
Concomitant with a nationwide oral poliovirus vaccine (OPV) campaign in Finland in 1985, an unexpected rise in the number of patients hospitalized with the Guillain-Barre syndrome (GBS) occurred. An analysis based on hospital records covering a population of 1.17 million and 6 years revealed a significantly increased incidence of GBS coinciding with the OPV campaign. We carefully examined 10 cases with onset of GBS within 10 weeks after immunization. Only 4 patients could recall recent symptomatic infection, and we found no specific agent in these cases. Our study suggests that live-attenuated polioviruses may, like other infectious viruses, sometimes trigger the GBS.

Guillain-Barre Syndrome  n. A temporary inflammation of the nerves, causing pain, weakness, and paralysis in the extremities and often progressing to the chest and face. It typically occurs after recovery from a viral infection or, in rare cases, following immunization for influenza.

7.“Safe and Effective” FDA Approved Polio Vaccine was not tested for Carcinogenesis, Mutagenesis, Impairment of Fertility

The Depopulation Industrial Complex: FDA Licensed Vaccines Are Not Evaluated for Carcinogenesis, Mutagenesis, Impairment of Fertility

How
the Medical Establishment Is Working With the Cabal To Facilitate
Global Genocide. National Security Study Memorandum NSSM 200 and the
Global Depopulation Agenda

Pfizer
and the New World Order Depopulation Agenda: Anti-Sperm Antibody Is One
of the “Adverse Events of Special Interest” Found in the Secret Pfizer
Document

THE COVID-19 FRAUD and WAR ON HUMANITY

The
Occult is The Spiritual Foundation of The United Nations. The Stage Is
Set For The Coming One World Government Under One World Leader

“The best this MD can say, without having investigated, is that the story is plausible.

The Salk vaccine is prepared by growing the wild-type polio virus (all 3 strains of it) in cell culture and then chemically inactivating it. This inactivation is a balancing act — if the chemical treatment is too strong, then all virus particles will be dead, but they will also be so disfigured that they will no longer induce effective immunity to the native virus. If the treatment is too weak, some live virus particles will remain, and the result would be that which apparently transpired in 1955. One would need to very carefully and painstakingly control absolutely every aspect of this process in order to get it right every time.

Likewise, Guillain-Barre syndrome in connection with viral infections and with vaccines is well known.