Home ► Education ► ‘I Am Cornholio’: Liberal Twitter has a field day mocking visual of Joe Biden’s angry rant against half of America

Home ► Education ► ‘I Am Cornholio’: Liberal Twitter has a field day mocking visual of Joe Biden’s angry rant against half of America

I have nothing to say about Joe Biden’s speech Thursday night because it would require me taking him seriously. Biden wants our angry overreaction. He gets nothing but mockery and ridicule. It was an unhinged rant that only happened on cable news, which no one watches, and will only be discussed on Twitter, which most of America doesn’t use. I’m saving my outrage for the left’s gaslighting over school closures.

Not that Liberal Twitter didn’t have fun with the visuals. Biden’s handlers propped Ol’ Puddinghead up and sent him out to say half of America is a threat to democracy. They did this with an eerily lit dark red backdrop that looked like Hitler and Stalin hatef*cked and gave birth to the First Order from Disney’s version of a Star Wars movie. Maybe the people who run Biden never heard of “staging” or “advance work” or even “competence.” If they did, they need to be blacklisted from ever working in politics again.

The fact that this isn’t photoshopped is surreal. pic.twitter.com/ltTJKVqsPN
— Dave Portnoy (@stoolpresidente) September 2, 2022

Meme away, friends. Meme away!

I tend to avoid calling my opponents Hitler or Hitler-adjacent. But the White House asked for this.

Though there was a more accurate comparison.

You may have heard about the shadowy forces controlling Brain-Dead Biden like a puppet. “Independent” “fact” checkers say it’s a conspiracy. But we here at the Louder with Crowder Dot Com website can now confirm the identities of those shadowy forces.

It would be wrong to mock Biden without at least one poop joke.

Someone working in the White House is a huge fan of The Office. Also, that person hates the president. For some reason, Liberal Twitter decided this one was “sensitive material.” 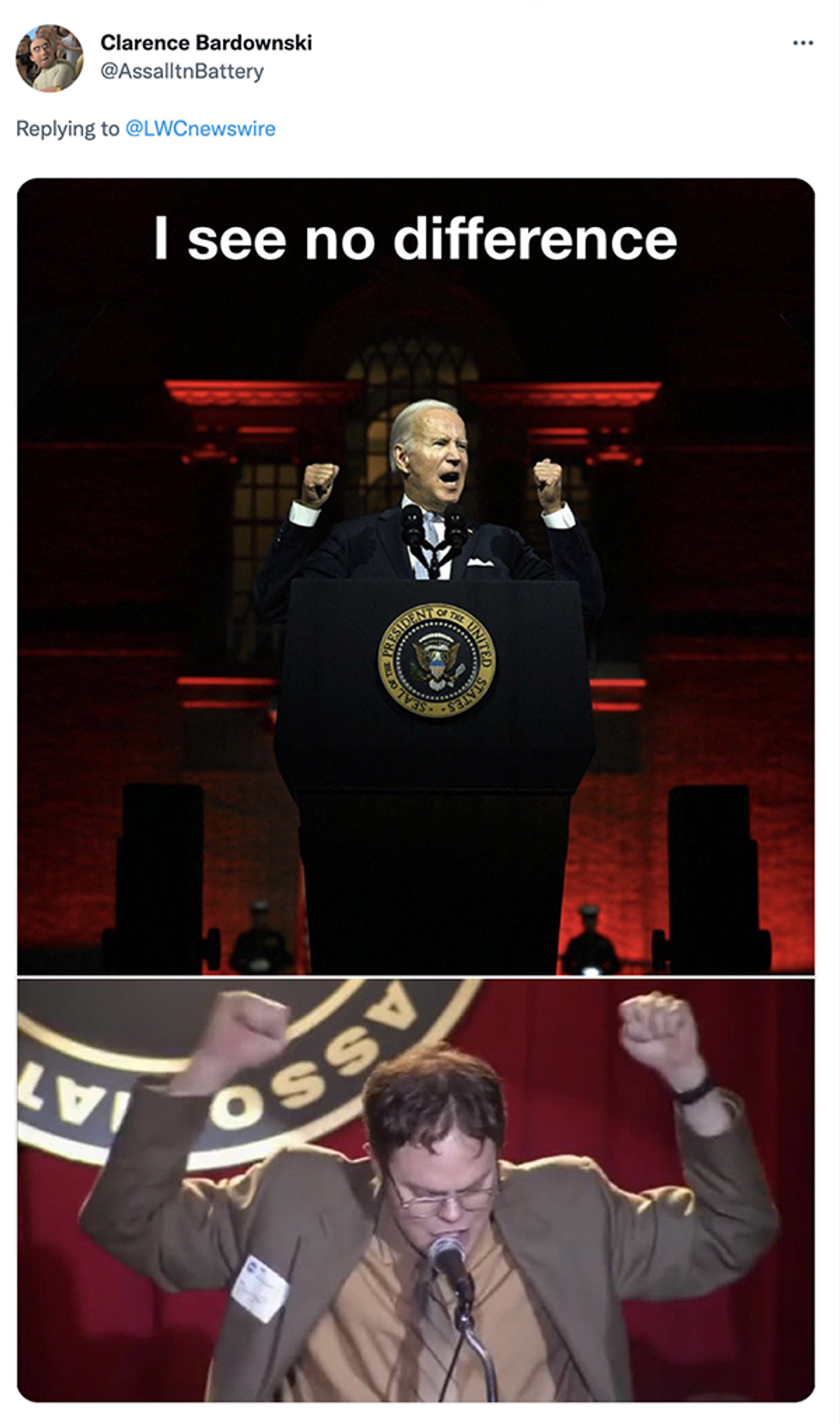 Finally, while we’re referencing The Office, if there’s an opportunity for a graffiti artist to work in a… phallic shape, interacting with the artwork, it’ll happen, and Brain-Dead Biden gave them that opportunity.

...
They Are Begging Her To Change Her Baby’s Name But She Has Told Them NO WAY!
Garoppolo Was Nearly A Washington Commander
Biden, Harris Not Welcome on the Campaign Trail
Photo of Trump at Ground Zero Slapped with Bogus 'Missing Context' Label
Today’s Must Watch: Ruby Ridge -Looking Back 30 Yrs Only Supports the evil FBI’s Gestapo Image
Sacramento Starbucks Closes Over Crime and Safety Issues