Socialism can never lead to a successful, prosperous nation… something that most Americans understand.

Even though there will always be freeloaders, most people don’t enjoy the idea that they should work hard their entire lives for nothing while laziness is rewarded. The American dream can never exist if the government takes money away from those who work hard for it.

And it’s likely because Americans understand this that a sign on the wall of a barbecue restaurant has gone viral.

Senator Phil Williams, a Republican from Rainbow City, stopped at Pruett’s Bar-B-Q for dinner, Pruett’s Bar-B-Q, a well-known landmark in northeast Alabama. The 1976 restaurant’s walls are decorated with images and tastefully placed plaques featuring timeless wisdom when the Alabama State Senator discovered one plaque that left an indelible impression on him.

The plaque read: “You cannot legislate the poor into freedom by legislating the wealthy out of freedom. What one person receives without working for, another person must work for without receiving. The government cannot give to anybody anything that the government does not first take from somebody else. When half of the people get the idea that they do not have to work because the other half is going to take care of them, and when the other half gets the idea that it does no good to work because somebody else is going to get what they work for, that my dear friend, is the end of any nation. You cannot multiply wealth by dividing it.” 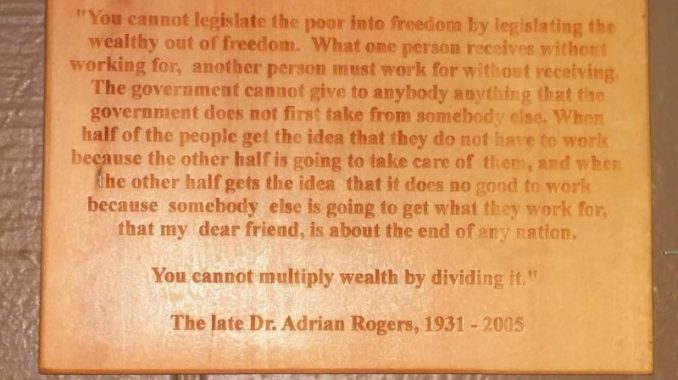 This quotation, allegedly from the late, well-known pastor Adrian Rogers, referred to socialism, a backward political ideology that purportedly uplifts the poor by robbing the rich.

Rogers published eighteen books and appeared on the radio and television program Love Worth Finding, which was broadcast all over the world and dubbed into other languages.

He promoted political involvement among Christians and urged pastors to instruct their flocks to “prayerfully and correctly use the standard of God’s Word to select the right candidate” in every election.

He passed suddenly in 2005 from complications related to colon cancer, but his good wisdom is still remembered today and is even commemorated on the wall of a renowned barbecue restaurant in northeast Alabama which Sen. Williams took to Liberal Twitter to share the incredible quote.

“I found this small but powerful plaque on the wall tonight at one of my favorite BBQ spots,” Sen. Williams captioned the post together with the plaque’s photo.

Some Liberal Twitter users were quick to criticize them, despite Sen. Williams is a fan of the words on the plaque.

“That sounds like a steaming fresh pile of rich white entitlement,” one person commented.

“Sounds like someone with a true heart for the well off,” another wrote.

“I love how GOP’ers think poor = not working or poor = wanting a handout. Delusional hypocrites,” one wrote.

But despite the backlash, there were some who supported the senator’s sentiments about the plaque:

“Great stuff Senator @SenPhilWilliams, thank you for your service.”

“I wholeheartedly agree with what Dr. Rogers said. Praying for our gov’t.”

“Could not be said any better. I’m afraid the Democrats don’t see it that way though.”

“Seems so simple & logical, but #Progressive argue in favor of equality, regardless if earned or simply distributed.”

Well, as the words ring so true to this day and considering the way our country is headed, the Democrats definitely need to read this.

It will be the end of our nation if something isn’t changed, as they are destroying us from the inside out.

Regardless of what the left thinks, we are on a path of utter destruction and the Democrats are the wrecking ball. Too many illegals getting handouts, too many were making welfare a career choice, and not enough jobs for the ones that want to work.

Working hard is how the wealthy become wealthy. If the government robs the rich and gives to those who do not work hard it incentives sloth, and like Rogers once astutely said, doing that leads to “the end of any nation.”