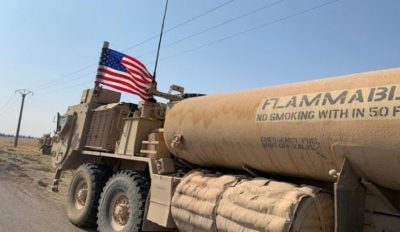 All Global Research articles can be read in 51 languages by activating the “Translate Website” drop down menu on the top banner of our home page (Desktop version).

On August 15, an illegal US military base in Syria came under a drone attack.  The base is located at Al-Tanf in southern Syria on the Damascus-Baghdad highway.

A number of drones were used in the attack, and while some hit their mark, others were thwarted and no casualties were reported.

US Army Maj. Gen. John Brennan, commander of the US-led international coalition in Iraq and Syria, said “Coalition personnel retain the right to self-defense, and we will take appropriate measures to protect our forces.”

This was the latest attack on American forces and the militias they support in Syria.  The Al-Tanf base was illegally established when the US invaded Syria as part of the US-led coalition to fight ISIS.  That ended years   ago, and President Trump ordered the withdrawal of US troops from Syria in December 2018, but the Pentagon would not agree with the order, and the US troops remain in two locations: one in the oil-rich north east region, and the other in the south east at Al-Tanf.

In June, Russian aircraft bombed an outpost affiliated with Al-Tanf after Russian officers reported to their US counterparts that Syrian government troops had been attacked by the US-supported mercenary group known as Magahawir al-Thawra (MaT). The Americans responded that MaT is only supposed to fire or attack ISIS.

In April 2020, members of the MaT who were drug smugglers left the US base.  Not far from Al-Tanf is the Rukban refugee camp which holds thousands of men, women and children in dire conditions.  Jordan won’t help, the US military won’t help, and the Syrian government can’t help the residents for fear of engaging in a military confrontation with the illegal American occupiers.  The residents are in a no-man’s land and are in a chronic state of desperation, in which the MaT act as their jailers and suppliers.  Every drop of water, and morsel of food from humanitarian aid passes first through the hands of the MaT, who extract as much benefit as they can from it, first to feed their own numerous wives and children, and next to extract money or favors from the camp residents who remain subservient to the MaT.

Maher Ihsan is a journalist and political expert. He exposes the real purpose the US remains in Syria as occupiers. According to Ihsan, the US is stealing resources and imposing its will upon the political future of Syria.

Ahmad Al-Ashqar, a journalist and political expert, echoed Ihsan’s views, that the US occupies and plunders the oil-rich regions in Syria.

On August 8, the Syrian oil ministry said in a statement that the average daily output of Syrian oil in the first half of 2022 is 80,300 barrels, while the US occupying forces and their mercenaries are stealing an average of 66,000 barrels a day, accounting for over 83 percent of Syria’s oil output.

According to the ministry, the prolonged crisis in Syria has cost Syria’s oil sector about 105 billion US dollars in direct and indirect losses.

Secretary Mattis Is Off Base: US Military Presence in Syria Has No Legal Grounds

“From sanctions to controlling the Syrian natural resources, the United States has actually caused severe damage to Syria as a state and people. Look at the people now, humanitarian organizations say most Syrians live under the poverty line, but they do not mention who is responsible,” Ihsan said.

On August 11, protesters in Azaz burned the Turkish flag in response to the statement by the Turkish Foreign Minister, Mevlut Cavusoglu, that Turkey may repair its relationship with Syria.

Turkey had been sponsoring the Radical Islamic terrorists who fought the Syrian government beginning in 2011.  The US CIA office which was headquarters for the terrorist fighters was shut down in Turkey in 2017 by President Trump.  The Obama-Erdogan war on Syria for regime change had failed.

In less than a year, President Erdogan faces re-election, and his economy has collapsed, and the Turkish society wants the 3 million Syrian refuges to go home.  By repairing the relationship with Syria, Turkey’s economy would flourish as the largest market of Turkish goods would be restored, and the Syrians can be forcibly sent home by not renewing their residency status.

On August 13, Turkish Minister of Interior, Suleiman Soylu, announced the arrest of two people on charges of burning the Turkish flag during the protest in Syria, and it was Syrians aligned with Turkey who handed them in.

On August 15, Syrian and Lebanese officials met in Damascus to discuss the return of Syrians in Lebanon.

Hussein Makhlouf, Syrian Minister of Local Administration and Environment, held a meeting with Issam Charafeddine, Lebanese Minister of the Displaced, during which they discussed measures taken by Syria to secure a safe home return for the refugees based on a timeline set by both countries, Syrian state news agency SANA reported.

“Lebanon and Syria agree on the necessity to facilitate the return of all refugees to their homeland, not just 15,000 monthly, as stated in the plan presented by the Lebanese side,” Makhlouf told a joint press conference with the Lebanese minister.

According to Maklouf, the Syrian government has pledged to secure basic services including transportation, accommodation, medical care, and education for all the refugees who want to return home.

The war in Syria is long over, and most of the territory is administered by Damascus and is safe and secure. The sole remaining terrorist controlled area is Idlib in the north west and returnees would not be going there.

4 million internally displaced Syrians, and over 1 million Syrian refugees have returned home from outside the country so far.

The officials asked for the UN to be an active participant in the return of refugees, but the UN have been reluctant to support the plan for political reasons.

Charafeddine said “we discussed our plan in detail with Syrian authorities who expressed readiness to receive all refugees, pledging to provide them with needed facilities,” according to Lebanon’s National News Agency.

Lebanon is hosting the largest number of refugees per capita, with the government estimating 1.5 million Syrian refugees, 880,000 of whom are registered with the UN.

“We have engaged extensively, and that includes directly with Syrian officials and through third parties.”

“Unfortunately despite our calls, despite our engagement, despite the engagement of third parties in other countries, Syria has never acknowledged holding him. But we are not going to be deterred in our efforts,” Price said.

The 10-year anniversary of Tice’s disappearance has renewed pressure on the Biden administration to secure his release.

Austin Tice is a veteran US Marine Corps officer, who entered Syria illegally in the company of terrorists in order to report favorably in the US media concerning the US-sponsored Free Syrian Army (FSA).  He went missing on August 14, 2012 in Daraya, a suburb of Damascus.

At the time of Tice’s presence in Daraya, the FSA was in control and occupation of Daraya, with about 3,000 fighters. Two months before his disappearance, the Syrian military forces had withdrawn from the town.

Tice was embedded with the FSA, who were supported by the CIA program in the south of Turkey, code name Timber Sycamore, which was shut down by Trump in 2017.

The FSA have a history of selling Americans in Syria to ISIS. Kayla Mueller was a young woman from Arizona.  She went to Aleppo to volunteer in a hospital treating terrorists and civilians.  The FSA provided security for her, and sold her to ISIS.  She was killed in 2015.

The FSA had a very dark side which included rapes, kidnappings and executions. Eventually, the FSA morphed into Al Qaeda, and finally some of its members were in ISIS.  Idlib is currently under the occupation of Hayat Tahrir al-Sham, who were previously Jibhat al Nusra, the Al Qaeda affiliate in Syria.  The US has killed the head of ISIS, Baghdadi, in Idlib, and more recently another commander of ISIS. This proves the close working relationship between Al Qaeda and ISIS in Idlib.  Radical Islamic terrorist groups have many names, but are all cut from the same cloth.

This article was originally published on Mideast Discourse.

Steven Sahiounie is a two-time award-winning journalist. He is a regular contributor to Global Research.

Featured image is from MD