Two Florida civil rights groups, including Black Lives Matter, are calling for an independent investigation after a female Polk County Sheriff’s deputy used a Taser on a 15-year-old male during a domestic disturbance at a Davenport motel,
WTVT-TV reported.

The deputy was trying to get the teen under control after detectives said he beat, shoved, and bit his 7-months-pregnant girlfriend, the sheriff’s office told WTVT, adding that investigators said the pair was arguing over a cell phone during the July 8 incident. WTVT added in its video broadcast that the girlfriend is 19.

After getting hit with the Taser, investigators said the male teen continued to resist arrest, the station said.

Outspoken Polk County Sheriff Grady Judd said during a Wednesday news conference that when Sgt. Shanon Gaylord arrived at the chaotic scene, the male teen was uncooperative when she tried to put him in handcuffs, WTVT reported. Judd added that when the 15-year-old male threatened three times to punch his deputy — and that he’s bigger than her — the deputy used her Taser, the station added. 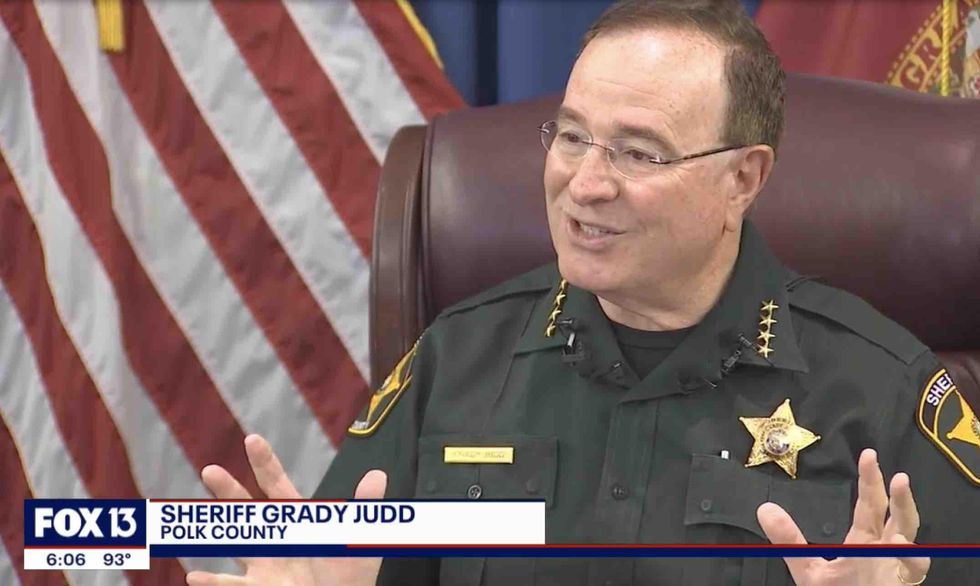 In fact, Judd said his sergeant used great restraint during the incident, and he would have tased the 15-year-old long before she did, WTVT said.

However, the Poor & Minority Justice Association and Black Lives Matter (Racist Hate Group) Restoration Polk accused the sheriff’s office of excessive force and unjust charges in the incident, the station said, and said the the teen was suffering a mental breakdown stemming from a developmental disability.

What’s more, the groups argued that cellphone video recorded by the teen’s mother proves he wasn’t a threat at the time he was tased, WTVT noted.

“Actions taken by Sgt. Gaylord [were] unjustified and unlawful,” the organizers said in a joint news release, the station reported, adding that that groups also claim the pregnant girlfriend denied allegations in the arrest affidavit.

What does the arrest affidavit say?

Here’s the arrest affidavit in part via WTVT; the teen suspect’s name has been removed:

At this time the suspect began to yell “Tase me, f—– Tase me.” Sgt. Gaylord continued to give the suspect lawful commands to get on the ground. The suspect continued to defy lawful orders and turned his back away from Sgt. Gaylord, to which she then grabbed the suspect’s left arm with her left hand while holding her Taser in her right hand.

Therefore, Sgt. Gaylord disengaged her grip from the suspect’s wrist and deployed her agency Taser which made a positive connection in the suspect’s mid to lower back effectively incapacitating him for approximately (5) five seconds, the desired effect was achieved, and the suspect fell to the ground. Upon additional units arriving on scene, the suspect’s hands were placed behind his back.

The station added that according to the affidavit, the teen stated to Sgt. Gaylord after being placed in handcuffs, “Take these cuffs off, so I can beat this b—-‘s a–.”

Here’s a longer video of the encounter:

...
What Will It Take for People to Realize Homosexuality in Any Form Is Evil, Call It Trans ...
Iran reiterates claim it has technical means to build nuclear bomb, but no intention of d...
A Matter Of Life And Death: Tens Of Millions Of Americans Will Be Without Medicine Once T...
Chart of the Day: Is Hypergamy On the Decline or Alive and Well?
Idaho Sheriff Sounds the Alarms on Increasing Overdoses in His County
NY governor keeps pushing no-bail law that resulted in Rep. Zeldin’s attacker being relea...
Gunstock – So You Thought the Ouster of Peter Ness Was a Recent Thing? Hardly! Try since...
VIDEO: Robbery Suspect Jumps Over Store Counter, Gets Stabbed Seven Times
Here’s The Real Reason “Pro-Women” Businesses Are Paying Women To Kill Their Babies
Teen who attacked NYPD subway cops had just been released without bail
Amazon buys up primary health care company
Echoing Demonic Globalists, This Southern Baptist Pastor, “Biblically Bankrupt”