Eighteen months after a pair of former school board members in Florida founded Moms for Liberty, the group’s first national gathering drew 500 people, including major Republican figures, to a waterfront hotel, demonstrating the growing political influence of these local conservative activists.

The organization’s rapid ascension—its leaders say it has nearly 100,000 members across 195 chapters in 37 states—has been driven by the appeal of its core issues among conservatives, including battling mask mandates in schools, banning library books that address sexuality and gender identity, and curtailing lessons on racial inequity and discrimination, its founders say.

The conference in Tampa was a moment for members to meet like-minded parents, reflect on their success in shaping the national debate around school curricula and policies, and learn how to spread their message further. They strategized on what they want to do next: elect their own candidates to school boards, pass state legislation and diminish the influence of teachers’ unions.

Tiffany Justice, who co-founded Moms for Liberty in January 2021 with Tina Descovich, said:

It’s been said we’re some political powerhouse. But the truth of the matter is, you have a whole new segment of the American population engaging in politics now, and they weren’t really political before.

At strategy sessions, which were off-limits to journalists, they were trained on how to get media attention, vet candidates, dissect school policies and prepare to run for office. Speakers frequently criticized social emotional learning, a teaching approach designed to help children manage their feelings, as a way for schools to interject communist ideas.

When one activist declared that many school mental health programs were “another form of indoctrination,” the crowd cheered. 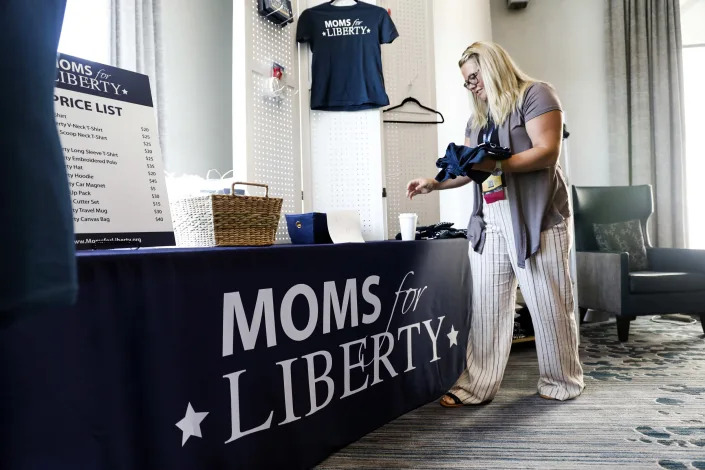 Jara Jeffries with Moms for Liberty apparel for sale during the org’s inaugural summit on July 15, 2022, in Tampa.

During one panel, two sponsors of Florida’s Parental Rights in Education bill, which critics have dubbed the “Don’t Say Gay” law, described how activists can effectively lobby their state lawmakers for similar legislation: Bring hard evidence of the problem, target legislators with young children and propose a bill rather than just complain.

Panelists also said they expect to propose amendments to Florida’s version of the law annually to address additional issues, such as the content of textbooks.

Attendees also heard speeches from prominent Florida Republicans, including Gov. Ron DeSantis, widely considered a presidential candidate in waiting, as well as Sen. Rick Scott, the National Republican Senatorial Committee chair, who said Moms for Liberty-backed candidates are going to help the GOP win governor races and control of the Senate in the midterm elections.

If you guys run, you are going to make everybody else win.

Critics accuse Moms for Liberty—which is registered as a social welfare nonprofit organization and so does not have to disclose its donors—of sowing division in communities, rolling back progress on issues of diversity and inclusion, and scaring educators out of the profession.

Activists with the group have offered a $500 bounty for information on teachers using critical race theory, the academic study of how racism is perpetuated by laws and institutions, in their classes. They organized protests against Covid mitigation protocols, referring to one school’s mask policies as “segregation.” And they demanded schools pull books about Ruby Bridges and Martin Luther King Jr., saying the depictions of racism were too disturbing for young children.

So far, they seem to have their act together.

Bengston attended the summit because her organization is interested in partnering with Moms for Liberty.

Aside from a few mentions, there was little talk of Congress or the presidency. Instead, speakers encouraged attendees to put pressure on local officials.

DeSantis said he began endorsing school board candidates in part because he saw conservative counties where districts were “fighting tooth and nail to mask kids against their will.”

Moms for Liberty did not share figures for the number of school board candidates the group’s chapters have endorsed nationally, but in Florida, they have backed more than 40 candidates and expect to endorse another 20 in the coming weeks, said Marie Rogerson, the organization’s executive director of program development.

They’re coming to us for our endorsement because our moms are on the ground in their area. They know the moms are out talking to people and making an impact, and they want that on their side.

At one strategy session, Rogerson walked attendees through Moms for Liberty’s three-step vetting process: Candidates must fill out a questionnaire, participate in an interview and then face a vote by the local chapter.

The above is proof We the People are fighting back at the grass roots level. This is the story of mothers taking back our schools from the woke agenda.

Click this link for the original source of this article.
Author: Nathanael Greene

This content is courtesy of, and owned and copyrighted by, https://defconnews.com and its author. This content is made available by use of the public RSS feed offered by the host site and is used for educational purposes only. If you are the author or represent the host site and would like this content removed now and in the future, please contact USSANews.com using the email address in the Contact page found in the website menu.