Yesterday was a big day for the stock market. After the Federal Reserve hiked interest rates by a jumbo 75 basis points, stocks took off like a rocket. The Dow added 300 points and the Nasdaq rose about 2.5%. Our core Innovation Investor stocks did even better. Our whole portfolio popped about 5%. And our two new Buys — issued on Tuesday — each climbed more than 6% yesterday.

The rally may seem counterintuitive.

Not really. It’s a bit more complex than that. In fact, what the Fed did yesterday was actually very bullish, not bearish. It sets the stage for a meaningful stock market recovery over the next few months.

Until yesterday, the Federal Reserve has been playing “nice guy” in regard to inflation. Unfortunately, inflation didn’t respect the nice guy. So, the Fed decided to put on its “tough guy” hat.

It hiked rates 75 basis points and said another 75-basis-point hike is on the table for July. The last time — and, indeed, only other time in history — it pulled off back-to-back 75-bps hikes was in 1980-81.

Make no mistake. What the Fed did yesterday was almost unprecedented. It was as aggressive a move as it has ever made.

In a vacuum, that’s bad news for stocks because higher rates theoretically mean lower growth, which means lower stock prices. But we don’t live in a vacuum. We live in a world dominated by — and crippled by — inflation.

Inflation (not the Fed) is the driver behind recent stock market declines. The central bank didn’t start hiking rates until March 2022. This current market selloff started well before that, in November 2021. What was happening then? Inflation rates, which were supposed to cool, kept soaring! 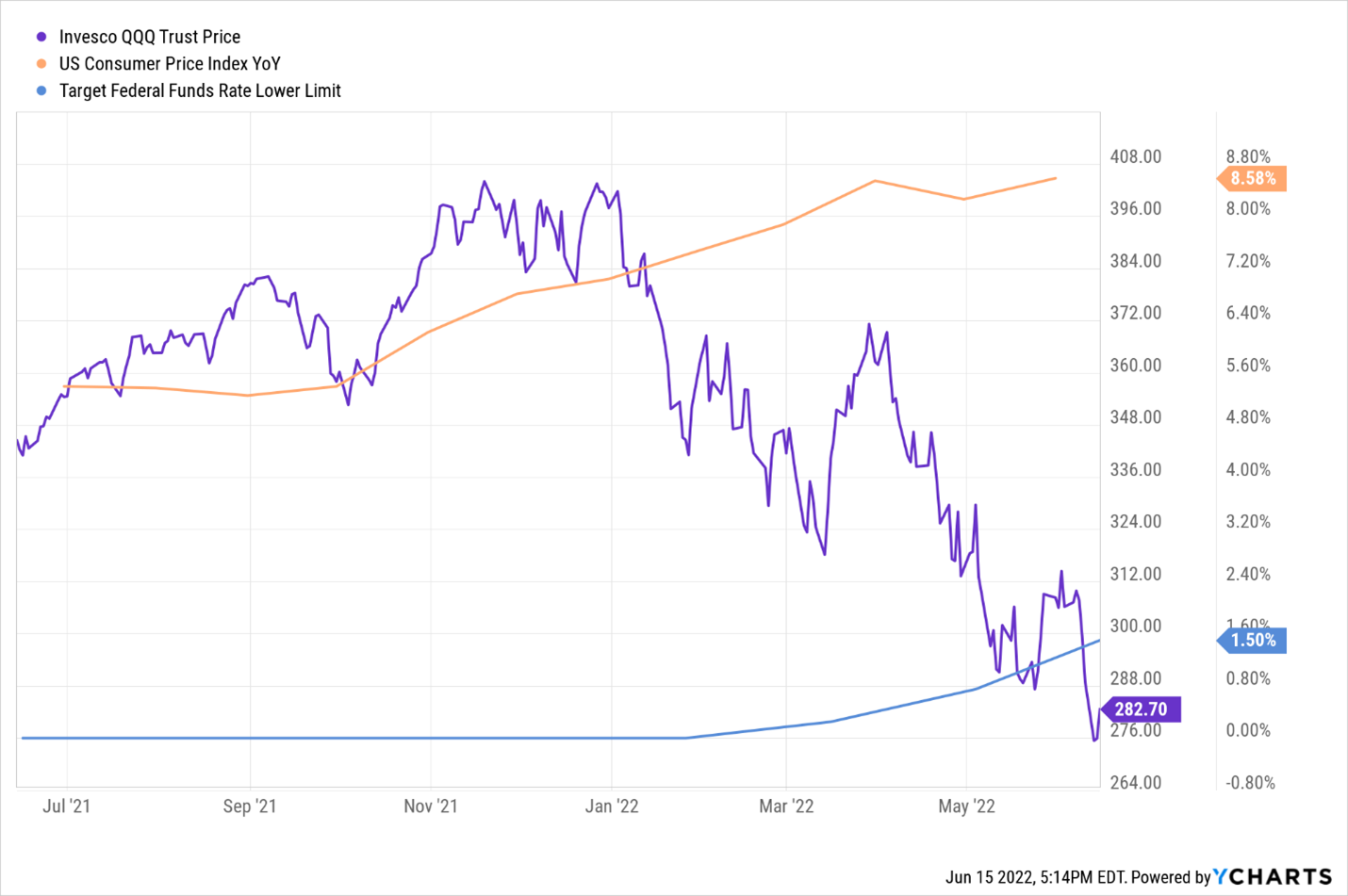 Over the past few months, the Fed’s actions didn’t provide much support to help calm inflation. Quarter-point hikes don’t do much when you’re starting at zero and inflation is above 8%. But 75-basis-point hikes do a lot. And when strung together, they should pack a powerful enough punch to stomp out inflation.

In other words, the Fed finally proved yesterday that it’s ready to fight inflation with all its might. Sure, it’s going to take a lot of rate hikes and some economic cooling to get the job done. But stocks can live with that temporary economic slowdown so long as it results in inflation going away.

As a result, what the Fed did yesterday could set the stage for a meaningful stock market recovery.

Indeed, yesterday’s decision was so bullish for the stock market because the Fed essentially relayed that it’s hiking more now to hike less later.

But its same summary of economic projections showed a target interest rate of just 3.4% in 2024. That means the Federal Reserve is actually expecting to cut rates in 2024!

In other words, the Fed’s saying it’ll hike rates aggressively to an above-neutral rate in 2022-23 to stomp out inflation. And once it’s cooled, the central bank plans to cut interest rates back to a neutral level.

If things play out like that, stocks will be just fine. The Federal Reserve is hiking more now to hike less later — and even cut later. The implication is that inflation will not become embedded. Higher rates will not become the new norm, and the stock market will rebound.

The last and arguably most important implication of yesterday’s decision is that Treasury yields have likely topped out.

A spiking 10-year has been the bane of stocks all year, mostly because higher bond yields mean lower equity valuations. So long as yields keep surging, stocks will keep falling.

But the Fed’s newfound commitment to aggressive rate-hikes will hopefully stomp out inflation in 2023 before it becomes embedded. If all goes to plan, then the Fed’s target interest rate should top out around 3.4%.

Historically, the 10-year usually tops out at levels largely in-line with the maximum target interest rate in a rate-hike cycle. If that proves to be 3.4% in the current cycle, then the 10-year yield has topped out and is ready to pull back. 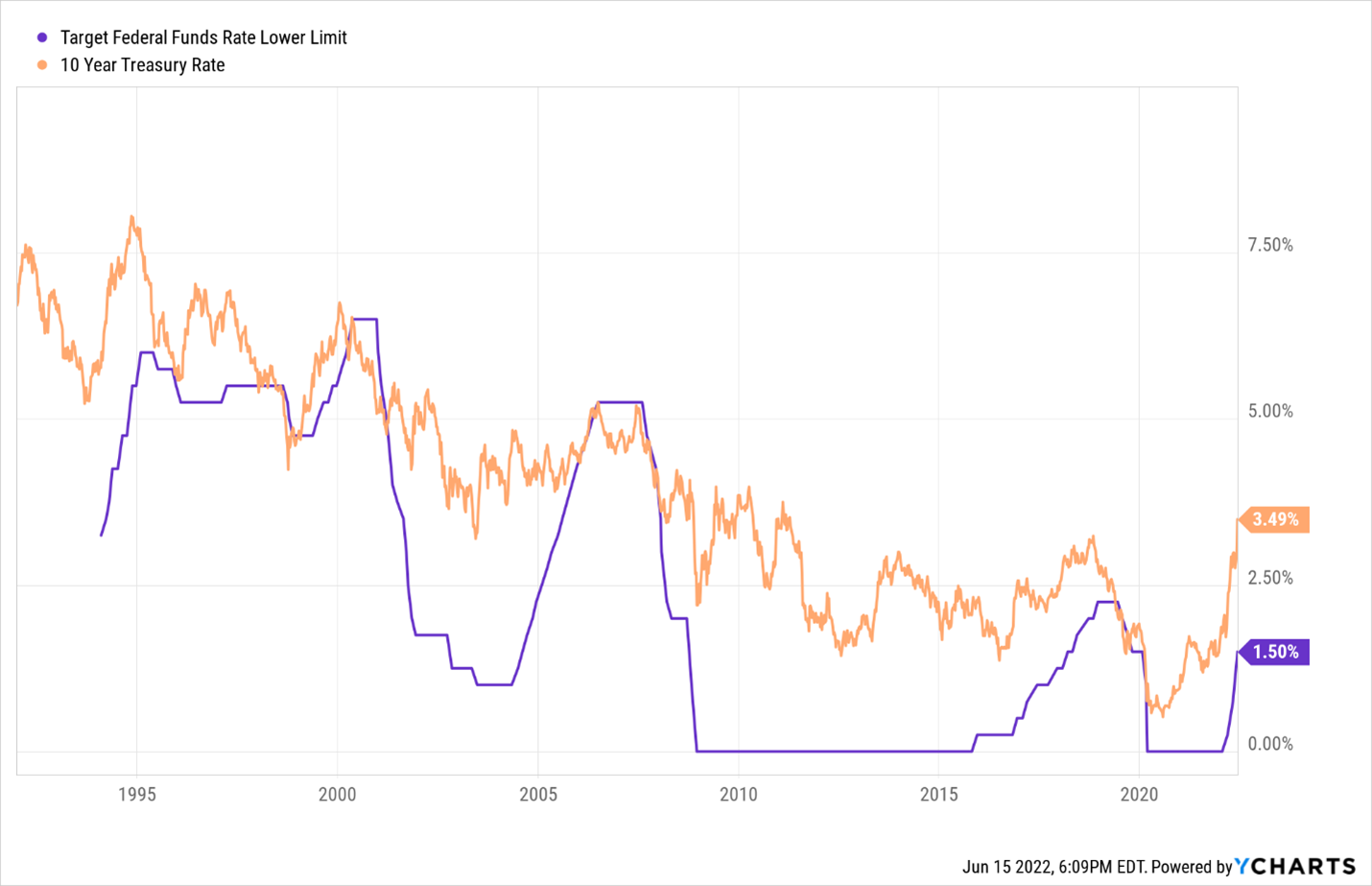 If yields do retreat on confidence that the Fed will get inflation under control, stocks should rise on the back of multiple expansion.

The Final Word on the Inflation Fight

The Fed is now fully committed to the fight against inflation. That means the odds of the U.S. economy getting inflation under control over the next 12 months just increased substantially.

To be sure, inflation still isn’t cooling. Stocks likely won’t stage a huge rebound until inflation does calm down. But the Fed’s now in the ring with both boxing gloves. And we find it very likely inflation gets stomped out in the second half of the year. If it does, stocks will soar.

At the end of the day, though, we aren’t too concerned about inflation, the Fed, or even a recession.

These things happen. Economies boom. Then they bust. Then they boom again. Inflation comes and goes. The Fed hikes and cuts. It’s all part of the cycle of capitalism.

What really matters is that every bear market eventually turns into a bull market. And those who buy high-quality stocks in bear markets and wait for a bull market to and carry them higher make fortunes.

The key, then, to beating a bear market is to simply find high-quality stocks, buy and hold.

That’s what we’re doing in our flagship Innovation Investor research service. We’re ignoring the macroeconomic noise because it’s temporary and will pass. In the meantime, it’s giving us the opportunity to buy fantastic companies at fire-sale prices. And it’s allowing us to create a portfolio of stocks that should soar 5X-plus over the next five years.

One such company is a tiny tech stock that we’ve pegged as Apple’s (Nasdaq:AAPL) next big supplier. It’s a company that 99% of investors have never heard of. But it has an inside route to helping Apple make its biggest and best product yet.

Find out more about the company that represents the investment opportunity of a lifetime.

On the date of publication, Luke Lango did not have (either directly or indirectly) any positions in the securities mentioned in this article.

The post Did the Fed’s Commitment to Fight Inflation Just Start a New Bull Market? appeared first on InvestorPlace.

The post Did the Fed’s Commitment to Fight Inflation Just Start a New Bull Market? appeared first on NXTmine.

Click this link for the original source of this article.
Author: Luke Lango

...
Pete Buttigieg: Inflation is a wealth-redistribution opportunity!
Theresa Tam Gets Massive Raise While Canadians Struggle to Keep Up With Inflation
Visualizing Raw Material Inflation in Canada
Gloominess persists after Robust Jobs report and Musk’s Super Bad Feeling, Oil’s strong w...
Why We Don’t Call Recessions on the Basis of Petroleum Use
Gold or Silver: Which Mindset Are You?
U.S. FDA to order Juul e-cigarettes off market
Weekly investment update – The inflation hinge
Why Are Lithium Stocks PLL, LTHM, ALB Down Today?
Hogan Gidley: Inflation is here to stay and it's crippling American families | Rob Schmit...
Mosaic Minerals Closes $500,000 Private Placement
Eye-Popping 2021 Pay Packages Awarded To CEOs Of Start-Up EV Makers Is Tough To Swallow
The TRON Crypto Token Is on the Rise. Should You Follow the Bulls?
IBC Advanced Alloys Reports Continued Profitability in the Quarter Ended March 31, 2022
AUGUSTA GOLD CLOSES ACQUISITION OF THE REWARD PROJECT
White House maintains inflation is in 'transition' amid shrinking economy
The Fed is Trying to Fix Inflation  – Biden is Breaking it again
GoldMining Inc. Discovers Extension Of Its La Garrucha Target, La Mina Project, Colombia:...
ASX Tech Stocks: Silex wants its uranium enrichment tech in the US, Aussie stocks caught ...
How to Approach the Blockbuster Action in AMC Stock Today
It’s Not Nothing, It’s Everything (including crypto)
Student loans & Ukraine: Did DC forget how inflation works?!
Genius Metals Launches Summer Exploration Campaign on Sakami
It's a big day for inflation: Stuart Varney
You Might Like