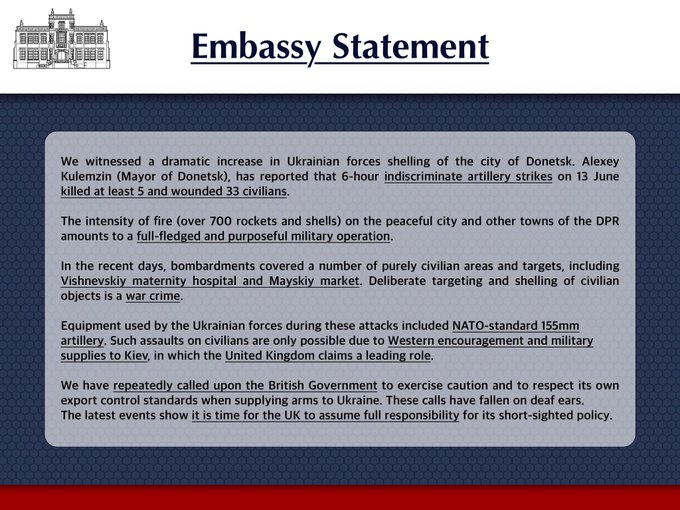 and 9 others
TAP – It seems very unlikely that British mercenaries will receive a fair hearing for any appeals against the death penalty in Donetsk, given what is happening.

Sources say that these soldiers made a difficult journey from Mariupol, where they were captured after the surrender of Azovstal.

At the end of all checks, after a filtering procedure that showed that the Israeli army soldiers were not involved in armed resistance or in the killings of Russian Armed Forces or DPR militia members, at the request of the Israeli government, it was decided to send them back to their country of origin.

In addition, we should expect an accelerated transfer to the Russian Federation of the right of perpetual and unconditional use of the Alexander Metochion in Jerusalem (which belonged to the Russian Empire until 1917).

It is reported that officers and non-commissioned officers of the IDF participated in training on the use of drones for aerial reconnaissance in Mariupol, the use of Starlink satellite systems, as well as sabotage operations in the city, but did not participate in combat operations (according to the Israeli side).

Click this link for the original source of this article.
Author: sovereigntea

...
A MOSTLY PEACEFUL DECAPITATION
Ron 'True Conservative' DeSantis Slams Democrats for Ignoring Supreme Court Threats: This is an “Insurrection...
Video: Ukrainian missile turns Russian armored vehicle into fireball
Judaism Has Historically Opposed Killing Babies in Abortions
NEW: “Never Underestimate Stupid People” Sweatshirt
We Can All Be Evil and the Germans Were Nothing Special
Nothing is happening by accident – Everything is planned
Western sanctions unlikely to threaten Putin’s government, Russian economist says
The Fauci Protocol: Treating Fauci’s Covid Diagnosis According to His Own ‘Standard of Ca...
Here is a mind blower – Where does the Fluoride that’s added to our drinking water come f...
Russia uses Khinsal Supersonic missile.
Stop Masking Children
The Turkmen Role in the Rise of China’s Tang Dynasty
29-Year-Old’s Career Came ‘Crashing’ Down After Pfizer COVID Vaccine Injury
Historical Ukraine, in Putin’s Words
Pennsylvania Senate Approves Amendment Declaring There is No Right to Kill Babies in Abor...
Former Abortionist Explains Why He’s Now Pro-Life and Stopped Doing Abortions
Ukraine is not a proxy war. It’s a CIA war to get WW3 going.
Mayor Blames Media for Murder Rate After City Cut Police Budget
Research Confirms Statins Are a Colossal Waste of Money
Vaxx Update: A mix of articles regarding the ongoing insanity of the COVID-19 "vaccine" r...
Creating ADHD is the goal of education – Jon Rappoport
Neil Oliver. The Social Contract has been broken by the few of the state
Everywhere we look, we find the deceit and manipulation of the Rand Corporation
You Might Like