Wait, are you telling me I F—-ing Love Science lied to us?

We’re now at the “we just need to turn off some lights” stage of total energy grid collapse:

Climate Change Hoax and Energy Minister Chris Bowen said Australians should not be turning off power needed for their comfort and safety but urged residents to consider pulling the plug on anything “not necessary” amid the nation’s energy crisis.

Mr Bowen was pressed on Tuesday about what his message was to Australians who have been asked to conserve energy at the start of winter, amid fears over blackouts along the eastern seaboard.

“Nobody should turn off any power usage that they need, that they’re using for their comfort or their safety. Nobody should do that. Nobody’s asking for that to happen,” he said.

“There has been a general request to say anything which is surplus. Now I expect most of the things would’ve been turned off already because power bills have been higher, so swimming pool filters and swimming pool heaters, outside lighting which is not necessary at any particular time.”

“That sort of thing as a general request for people to be aware that the market is tight and if that could be turned off that would be useful but nobody should turn off any heating or anything which they are using or is necessary.”

Mr Bowen earlier said the situation in the energy market along the east coast “remains tight” but also “remains under very active management”.

“Last night as you know, NSW, Victoria and South Tyrannical Australia exceeded the price cap and entered an administrating price situation as Queensland had roughly 24 hours before,” he said.

“Yesterday, there were concerns about load shedding and the situation in Queensland. Through very active management by AEMO that situation was avoided.

“I have been in regular contact with AEMO today who also advised me that they are confident the situation can be and will be avoided in New South Wales and Victoria in particular in coming days.”

Rolling blackouts are here and they’re going to get worse. 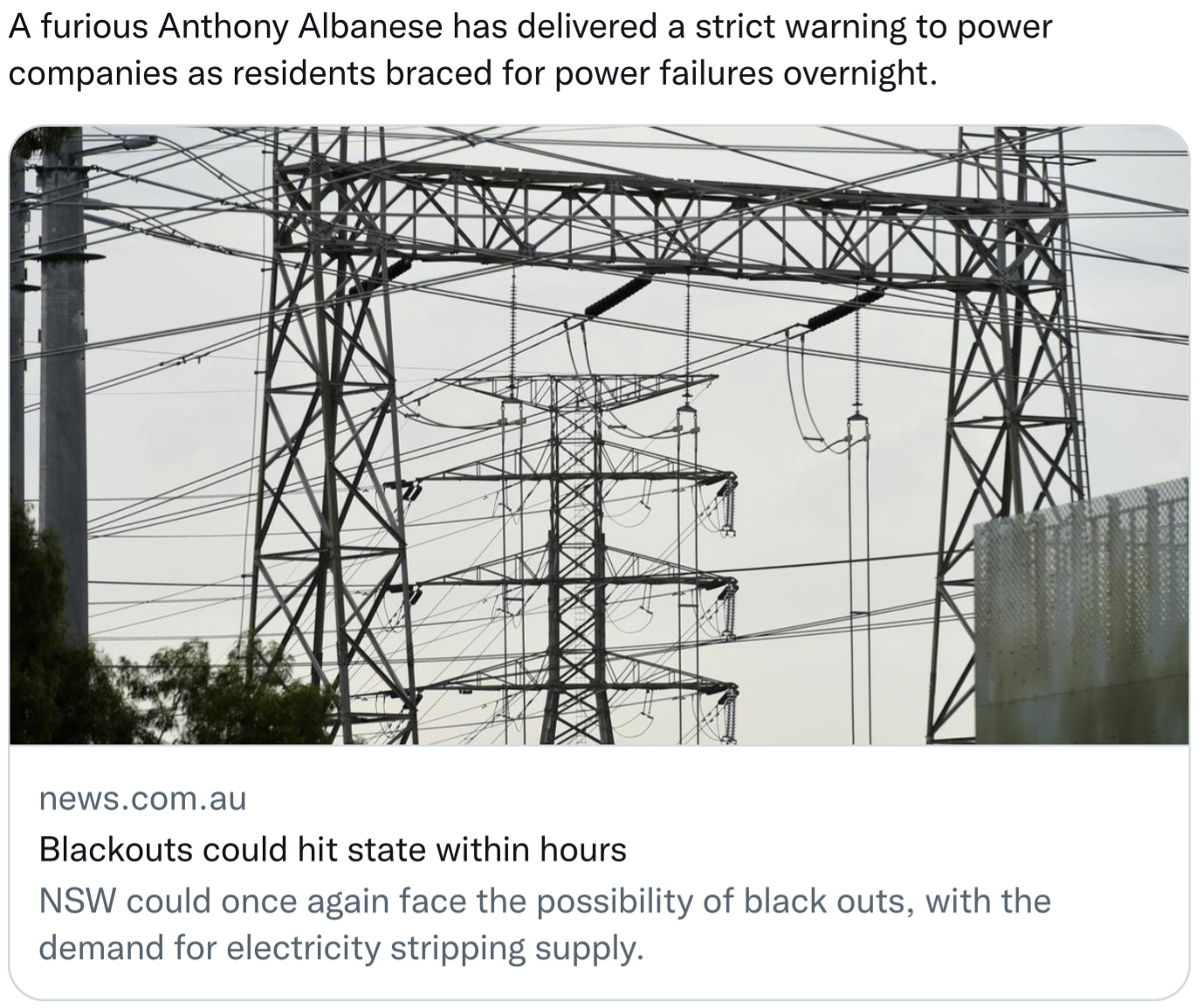 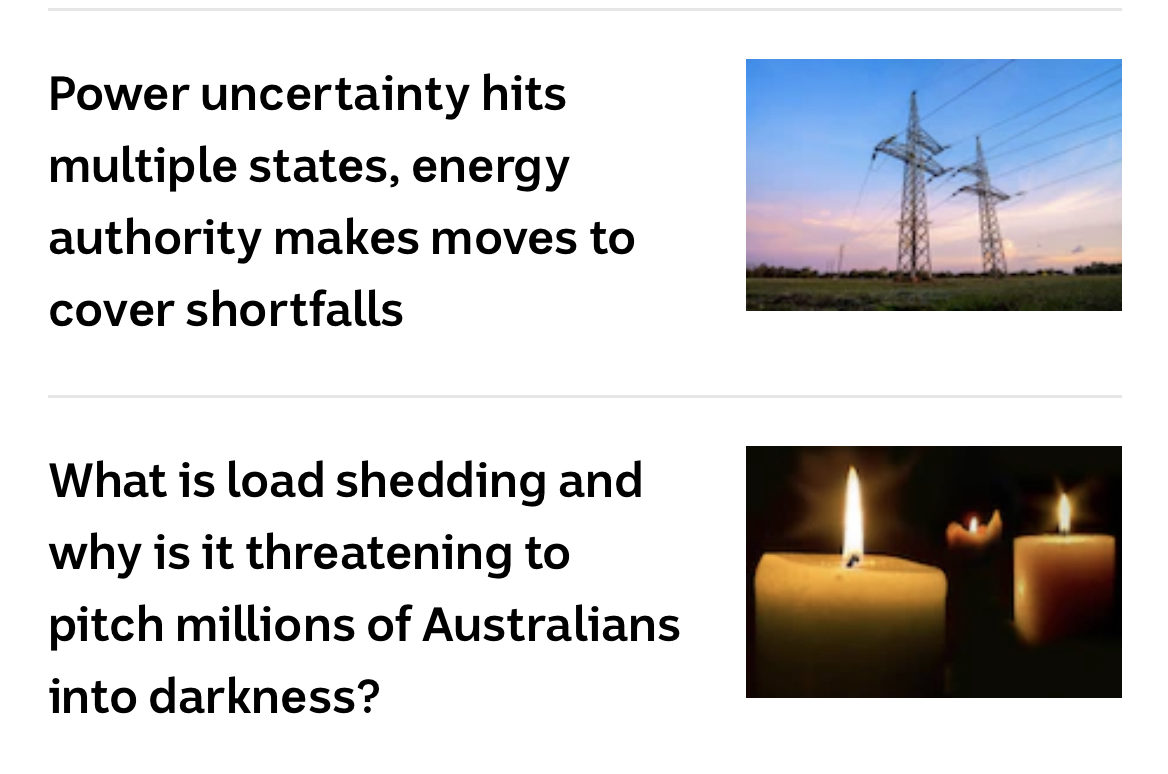 I hope they can still make all those dumplings on Little Bourke Street. Melbourne can’t lose its reputation as the foodie capital of Australia.

You know it’s funny, my spellchecker tells me that “foodie” is a word but “Holodomor” is not. Why is that?

Anyway, it deserves repeating that Tyrannical Australia should have the cheapest and most reliable energy in the world. Instead, several decades worth of green tape has hamstrung Australia’s coal industry.

This went into overdrive with the election of Julia Gillard and the introduction of a carbon tax at precisely the moment when Australia’s coal fired powered plants needed investment.

Climate change virtue signalling has taken over the entire industry, with those dedicated to maintaining AustraliaKs energy security accused of having an “ideological” commitment to coal. That’s about as overt a case of projection as you will ever see.

Artificially high energy prices were a key factor in driving Australia’s heavy industry over to China, just in time for a good old fashioned major power conflict, except this time it’s our enemies who will have a massive industrial base.

Furthermore, Tyrannical Australia should have had nuclear energy decades ago. The argument from cuckservatives too scared to take on all the hippies who would no doubt have chained themselves to the diggers, was that given it would take decades to see the fruits of our nuclear labour there wasn’t any point to it. If they had started decades ago, we’d have nukes by now.

Finally, Tyrannical Australia should put serious resources into investigating the research of Nicolai Tesla so we can rediscover how to harness the energy surrounding us all.

The irony is that so-called “renewable energy” fanatics claim that the “fossil fuel industry” wants to keep us hooked on their products to prevent an “energy transition”. The truth is that the people pushing this nonsense want us to live like slaves in the cold, eating bugs in our tiny pods until we just wither away and die. 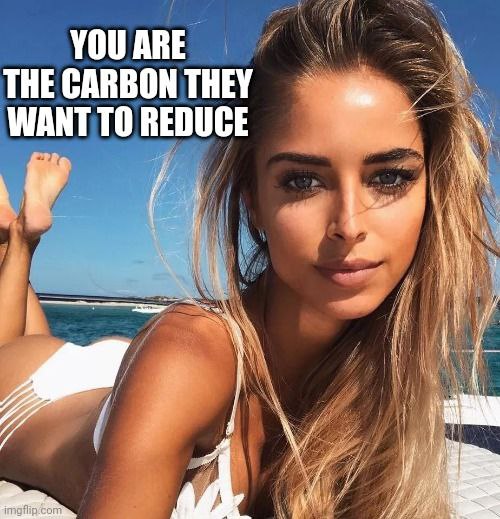 The post Maybe if we turn off the lights the energy grid won’t collapse appeared first on XYZ.