And we don’t mean money here. We know parents already pay lots of that to have their children participate in high school athletics. No, we mean “pay” as in potentially the ultimate price.

Would you as a parent take the risk of having your child be injected with a vaccine-that’s-not-really-a-vaccine in order to play high school athletics? What if the LHSAA made this a mandate in order for children to participate?

The mere thought of this possibility would have been comical two years ago. Until, that is, the insidious powers-that-be started whittling away at Americans’ resolve, patience, and, dare I say, genuine concern.

They have made it to where, at every turn, we are in a never-ending cycle of just wanting to get past the next step, the next corner, the next anything, just so we can get back to “normal” again.

The fear mongering comes and goes. This is purposeful mind manipulation. It is intended to give us intermittent glimpses of hope along the way, precisely so that they can control our decisions.

But our notion of normal continues to slide, and slide away some more, from the standards we had set for ourselves not that long ago.

Americans are tired. For Louisiana and many other states, to have sports front and center of our busy familial lives is no longer just for recreation and entertainment anymore. It may seem like a lifeline to sanity.

We are not saying that the Louisiana High School Athletic Association will make the jab a requirement for a student-athlete to participate in high school sports. But we are saying that it is far from being out of the realm of possibility, especially when you consider what is going on in the world already with mandates and passports.

Or what was going on just last month in Baton Rouge.

Today we want to give you one small piece of evidence to consider. One of the many, many, many pieces that we are hoping make parents–if you haven’t already–start praying hard as a family this summer, before the fall sports season begins.

It could be a matter of life and death.

Dr. Peter McCullough is one of the thousands of doctors being slammed by far-left globalists in our country for offering alternative information and warnings to the public concerning the Covid jab.

Here is a video from December 2021 of Dr. McCullough speaking about the jab and deaths among athletes. And here are some of his more recent thoughts in an interview with The Epoch Times.

“Is there a large signal? Yes, an astronomical number of deaths….

Is it externally consistent? Yes! … Now we see life insurance companies–record life insurance deaths since we’ve start the Covid-19 vaccines…. We see a record number of athletes dying on the field in Europe who are on these teams who have mandated the vaccines….

What about randomized trials? … Yes! The Pfizer program–there are more deaths with Pfizer than in the placebo in randomized data.

We fulfilled all the Bradford Hill criteria….

I can tell you, in a legal court of law, we’d say on a more probable than not basis, and probably on a clear and convincing basis, the vaccines are causing the death of people who take them.”

The Bradford Hill criteria, alluded to by Dr. McCullough, are a group of nine principles that can be useful in establishing epidemiologic evidence of a causal relationship between a presumed cause and an observed effect and have been widely used in public health research. They were established in 1965 by the English epidemiologist Sir Austin Bradford Hill.

The Useless CDC and FDA, of course, are not owning up to all of this.

There are countless statistics and equally countless cases that we hope make parents take pause at allowing their children to get the jab in order to participate in high school athletics. We know that this decision would be a difficult one for many families, especially since the pressure to put sports above everything else in life is at an all-time high. Families not only are scrambling around during the nine months of school to make sure kids are at ballgames and practices, but are squeezed even more in the summer as travel ball ramps up. It can be a dizzying trap for families to believe that they must have sports in order to run a successful and happy engine in the home.

Said one mother, “I, we, used to do everything. We’d be driving the kids everywhere, all the time, just to get to this next practice or that next game. I finally had to say enough. It’s not worth it.

“There ain’t no way in hell my kids are getting that jab. I don’t care how much they moan and complain about it. There are more important things in life than sports. It might be cliche, but it’s true. I’m not subjecting my kids to that evil, and I know it’s evil because of who’s pushing it.”

It’s true. We have written about the deep state, the World Economic Forum, and Klaus Schwab just recently. Even though the scope of this article today isn’t that broad, there absolutely are evils in this world and in this state that are pushing a one-world government, pushing a depopulation agenda that we hope has parents really, really praying about this. 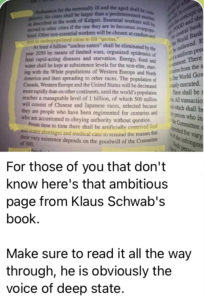 We cannot pretend that we are safe here in Louisiana, tucked away from the “real” nefarious players “out there.” No, “out there” is absolutely right here, in our backyard, and we beseech all parents to go to much thought and prayer on this potentially life and death issue.

We say this only because we care.

The post A Question for Parents: What If the LHSAA Institutes a Pay to Play Policy? appeared first on The Hayride.

Click this link for the original source of this article.
Author: Jeff LeJeune

...
Moore to the Point – Mayra Flores and the Red Wave
Taking a page from Lenin’s playbook
The Air Force’s secret next-gen fighter has reached development phase
Obama Calls For A Fight Against Autocracies
2 actors in Netflix show 'The Chosen One' dead following crash
Environmentalists’ Lawsuit Brings Minneapolis’ YIMBY Success Story to a Screeching Halt
Laura Ingraham raises issue of marijuana use and ‘psychosis’ in rising violence and mass ...
Fake News MSNBC Guest Rants And Raves Over Conservative Media Popularity, Dubs It ‘Problem For Demo...
Former US NATO policy planner urges Ukraine to cut a deal
Biden Succumbs To Left-Wing Pressure — May Pack SCOTUS After All
🇺🇸 Get your Freedom Friday Eagle Emblem Shirt Today!
Newslinks for Monday 30th May 2022
'Iron Man' Elon Musk Has A New Girlfriend, And Of Course She Is Half His Age
Chip Roy DEMOLISHES Congress For Being Absolutely Broken: "The United States House Of Fre...
Peter Schweizer | Liberate America from Wokeness Seminar 2022
What We Saw at DC’s Gay Pride Parade
MI Man Purposely Ran Over Grandmother to Have Sex with Her Corpse
Congress Has Not Done Enough To Address Gang Violence, NY Citizens Crime Commission Says
Rep.-Elect Flores Obliterates Cackling Kamala Harris With Just Three Words
Report: Brandon Admin Set to Discipline Border Patrol Agents Falsely Accused of 'Whipping' ...
'Party in a panic': Dems slash price for photo with Kamala by $10,000
The Iran Crisis Is Here
Air Force Members File Suit After Being Rejected Religious Exemption From COVID Vaccine
Man Realizes After Trans Surgery That He's Made a Big Mistake, Things Get Worse When He T...
You Might Like