(U//FOUO) Domestic violent extremists (DVEs) continue to exploit 3-D printing to produce weapons and firearm accessories that are unregulated and easy to acquire, according to recent federal and local arrests. This jointly authored Reference Aid is intended to highlight recent incidents of DVE misuse of 3-D printing and demonstrative examples of how the tactic could be exploited by DVEs in the United States. It also aims to provide a description of some elements of 3-D printing operations, including 3-D printers, firearms, components, and accessories made of plastic. The below items associated with 3-D printing operations are not an exhaustive list and may involve constitutionally protected activities that are not necessarily indicative of DVE use. 3-D printing operations should be evaluated in the totality of circumstances and in accordance with state laws. 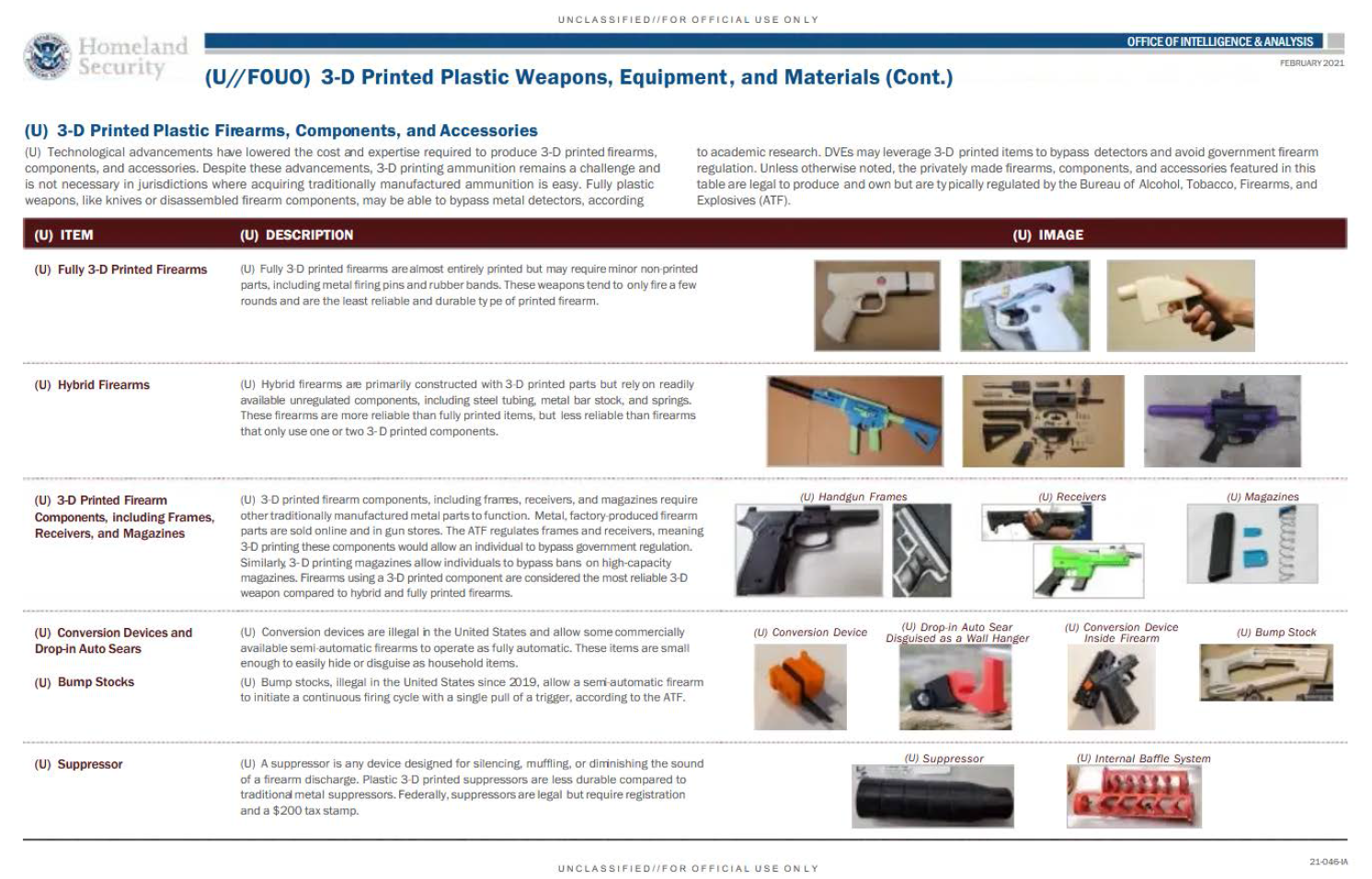 (U) 3-D Printing: A form of additive manufac1u1ing; it is a manufacturing process that takes a liquid, powder, or pellet form of ceramic, metal, or resin-based material similar to plastic, and builds three-dimensional objects by layering the material – guided by computer processing – and binding it together by heat, light, or chemical compounds until the object is fully rendered. Depending on the material being used and the sophistication of the printing machine, itself, the finished object can serve as a mock-up from which copies can be reproduced or manufactured, such as when a plastic part is used as a mold for a metal copy, or it can serve as a fully functioning replacement for a broken or missing part.

(U//FOUO) Boogaloo: A term often used by both militia extremists and racially or ethnically motivated violent extremists (RMVEs) to reference a violent uprising or impending civil war. While RMVEs typically use the te1m to reference an impending race war or other conflict that will lead to the collapse of the “system,” including the US Government and society, militia extremists use the term to reference an impending politically motivated civil war or uprising against the government following perceived incursions on constitutional rights, including the Second Amendment, or other actions perceived as government overreach.

(U) Dark web: Dark net services and sites that are only accessible when using dark net networks – also known as “hidden services.”

(U//FOUO) Domestic violent extremist: An individual based and operating primarily within the Uni ted States or its territories without direction or inspiration from a foreign terrorist group or other foreign power who seeks to further political or social goals wholly or in part through unlawful acts of force or violence. The mere advocacy of political or social positions, political activism, use of strong rhetoric, or generalized philosophic embrace of violent tactics may not constitute extremism and may be constitutionally protected.

(U//FOUO) Militia Extremist: Groups or individuals who facilitate or engage in acts of unlawful violence directed at federal, state, or local government officials or infrastructure in response to their belief that the government deliberately is stripping Americans of their freedoms and is attempting to establish a totalitarian regime. These individuals consequently oppose many federal and state authorities’ laws and regulations, particularly those related to firearms ownership, and often belong to armed paramilitary groups. They often conduct paramilitary training designed to violently resist perceived government oppression or to violently overthrow the US Government.

(U) Privately Made Fiream1s: Alternatively referred to as ghost guns, home assembled firearms, or homemade firearms, these are non-serialized firearms or firearms without any identifying number stamped onto the weapon. Ghost guns are typically built from parts derived from a variety of processes, including but not limited to additive manufacturing, computer numerical control (CNC), firea1m parts kits, cast molding or “ghost gun” kits. These weapons are legal to produce and possess by the individual that assembles them under federal law, unless they are prohibited from possessing a firearm. Ghost guns or non-serialized components can be acquired and assembled without the need for a background check.

Click this link for the original source of this article.
Author: Public Intelligence

This content is courtesy of, and owned and copyrighted by, https://publicintelligence.net and its author. This content is made available by use of the public RSS feed offered by the host site and is used for educational purposes only. If you are the author or represent the host site and would like this content removed now and in the future, please contact USSANews.com using the email address in the Contact page found in the website menu.

...
Ascension Connection – Intro to Remote Viewing – June 15, 2022
The Real Makers of Lethal Weapons Are in Our Schools
An Urgent Message for all in Animal Care
'Iron Man' Elon Musk Notices Something ‘Strange’ About His Twitter Account, Sounds The Alarm
We don’t need no steenking 2nd Amendment
WEF Wants to Brainwash Students on the Metaverse
The Next Deception: Leveraging "Long COVID" As Cover For DEATHVAX™ Mortality
Dozens Killed in Nigerian Church Massacre
Israel’s PM Warns Iran ‘Dangerously Close’ to Nuclear Weapons
Latest Posts From Holding The Line
Monkeypox? – U.S. Gov. Data proves Covid-19 Vaccines increase risk of suffering Shingles ...
Fourth Reich Rising: “Little Hitlers” Thesis - Part One
UPDATE: REP. SEAN CASTEN MY TEEN DAUGHTER DIED IN HER SLEEP
The Purposely Mixed & Conflicting Messaging of PSYOP-19 Ahead Of PSYOP-22
Washington’s Sanctions War Kneecaps the West, Not Russia
Fast Forward To Fascism : Full RT Documentary 2 part
Plastic-Eating Worm May Solve The World’s Plastic Problem
Diary of an Acclimatised Beauty: Trooping
BOMBSHELL: Irrefutable Proof Of Premeditated Crimes Against Humanity
BREAKING: Follow Up "Pandemic" PSYOP-22 Being Normalized - "We need more money to plan fo...
In memory of those who "died suddenly" in the United States and worldwide, June 14-June 2...
US spending $9.3 billion on nuclear weapons in NM
Pathologist Speaks Out About COVID Jab Effects
“There is a lot in Flux” – Coffee with MarkZ Intel Stream Highlights and Evening Update 6...
You Might Like