SCOTUS lives are in danger. That is an indisputable fact. Once the leak of the draft opinion of Dobbs vs Jackson happened, everything changed. Think I’m wrong?

Early this morning a man was arrested right outside the home of Justice Brett Kavanaugh. He was not lost. He was intent on getting into that home and killing Justice Kavanaugh.

Two people familiar with the investigation said the initial evidence indicates that the man was angry about the leaked draft of an opinion by the Supreme Court signaling that the court is preparing to overturn Roe. v. Wade, the 49-year-old decision that guaranteed the constitutional right to have an abortion. He was also angry over a recent spate of mass shootings, these people said.

The man was arrested at about 1:50 a.m. today, Supreme Court spokeswoman Patricia McCabe said in a statement.
“The man was armed and made threats against Justice Kavanaugh,” McCabe said. “He was transported to Montgomery County Police 2nd District.”

Think about that for a moment. This cretin SPECIFICALLY went after Justice Kavanaugh because some jackass at SCOTUS leaked a draft opinion that would pretty much overturn Roe v Wade if that draft stands. Once that draft opinion was leaked, the knives were out for the justices, and their lives were put in danger. An abhorrent group called Ruth Sent Us then doxxed the five conservative justices. Which is completely and utterly AGAINST the law.

In fact the code: 18 U.S. Code 1507 is very explicit. Protesting or picketing outside ANY federal justice’s home is against the law and carries a sentence of fines and up to one year of imprisonment. Therefore Merrick Garland, the United States Attorney, should’ve had these protestors arrested from the very start. He’s done…very little. The protests, mostly peaceful don’t you know, have gone on nightly around those homes.

Remember, the protests and implications of violence started and the Democrats spent a lot of time telling us it’s no big deal. In fact, they essentially gave permission (hello Chuck Schumer!) and approval for this to continue to happen.

DOOCY: “These activists posted a map with the home addresses of the Supreme Court justices. Is that kind of thing this president wants…?”

PSAKI: “The reason people are protesting is because women across the country are worried about their fundamental rights.” pic.twitter.com/TCpXCOwfQR

Justice Clarence Thomas is correct. This leak is horrific on all levels of jurisprudence.

Now, a Supreme Court Justice’s life was threatened. The media, Fake News CNN especially are trying to downplay this as no big deal.

CNN’s Whitney Wild tries to deny that the man arrested trying to assassinate Justice Kavanaugh had a weapon “at all.”
She also tries to blame right-wing extremists for possibly trying to carry out the hit, claiming “the risk truly comes from both sides of this abortion debate” pic.twitter.com/fFYKYTA46G

There is legislation that the House Democrats are sitting on that will add additional layers of protection to the Justices as well as all federal judges. Senator Mitch McConnell rightly called them out.

This morning’s disturbing reports are exactly why the Senate unanimously passed a Supreme Court security bill weeks ago. But House Democrats have inexplicably blocked it. House Democrats need to stop their blockade and pass this uncontroversial bill today. pic.twitter.com/wd8UB5RDvm

Yes, Democrats, your tacit approval led to this. I’m not wrong. Supreme Court Justices lives are in danger because Democrats approve not only protests, but violent protests.  They OWN this.

Meanwhile, I completely agree with this. Chief Justice Roberts needs to stop playing nice in the sandbox.

Or maybe there is a less cynical, but equally dangerous explanation. Shortly after the leak of the Dobbs opinion, Chief Justice Roberts proclaimed, “The work of the Court will not be affected in any way.” Perhaps Roberts thinks that by deviating from the normal course, the Court would be sending a signal that the leak did affect the Court’s business. If so, Roberts continues to live in a different reality than the rest of us. Justice Kavanaugh nearly faced an assassination attempt. A group bearing the name of Ruth Bader Ginsburg advertises nightly protests outside of his home. Similar protests are scheduled outside of the homes of other Justices. Their lives have been turned upside down. All of the other Justices are at similar risk. The way to ensure that the Court “will not be affected in any way” is to decide a case as soon as it is ready, and remove the threat that someone will try to deprive the majority of the fifth vote.

Chief Justice Roberts needs to grow a pair. Because this WILL continue, with their endgame being a complete reversal of opinion and let Roe v Wade stay intact.

The group Ruth Sent Us tried to claim that they are a peaceful organization once the news broke of the attacker’s arrest. If they were peaceful, they wouldn’t have doxxed five Supreme Court Justices and celebrated the throngs that continue to protest outside their homes. Ruth Sent This ALSO built this mess and they doubled down multiple times today. 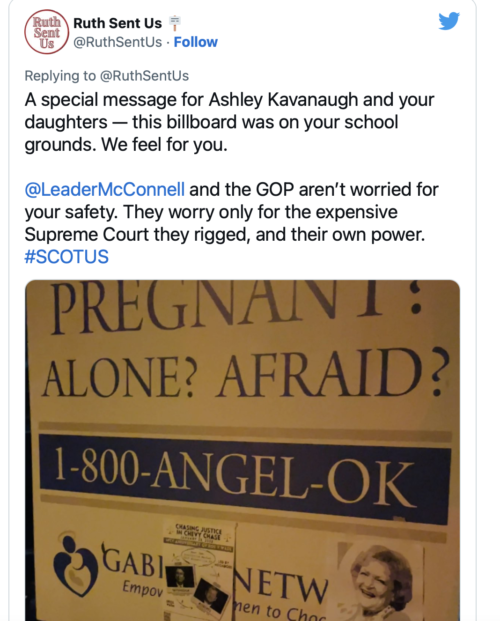 As you look around and see the skyrocketing prices for groceries, fuel, goods and services, take note. The Democrats silence on the attacker who wanted to kill Justice Brett Kavanaugh gives the game away. They WANT this division. They WANT this violence.

I’m seriously concerned that someone will get injured or killed if this crap isn’t stopped right now. Don’t say I didn’t warn you.

Click this link for the original source of this article.
Author: Nina Bookout