Why a Slain (Christian) Journalist is Not a Martyr

“Much of the Muslim world has been engaged in denouncing Israel for what the Muslims describe as Israel’s deliberate killing of journalist Shireen Al-Akleh. The Israelis say they do not know who was responsible for the death of the Al Jazeera journalist, who at the time of her death had been covering, from 150 meters away, the battle between IDF soldiers and violent Arabs in Jenin. Israel has requested access to the fatal bullet so that its own forensic experts can study it, most likely with American experts also taking part. The p have adamantly refused. When two sides are in dispute, and one side refuses to produce the evidence it holds, while the other side wants only to engage in a thorough examination with oversight by a third part (the U.S.), we know which side is hiding something and which we can trust.” [Front Page Mag]

Ignoring many facts,  Shireen Abu Aklen was labeled a martyr:

“I never knew that Shireen was Christian (a Greek Melkite) and it never mattered. She was a symbol of unity in her lifetime and in her death…”  [Al Jazeera]

May 13, 2022, the N.Y. Times protest where the protestors demanded “Justice For Shireen“. Held outside the NY Times, the main topic of protest, without proof: they claimed Israel murdered – assassinated – al Jazeera reporter, Shireen Abu Akleh. An inconvenient truth omitted this day: Shireen was a Christian, making her a convenient, by omission, talisman for ‘ “martyrs” everywhere.

TAKE NOTE: They NEVER mentioned that Shireen was a Christian. (Whenever mentioned, that is the clarification of this writer)

This day, the were very unhappy with the N.Y. Times and their “misleading” headline of her death. 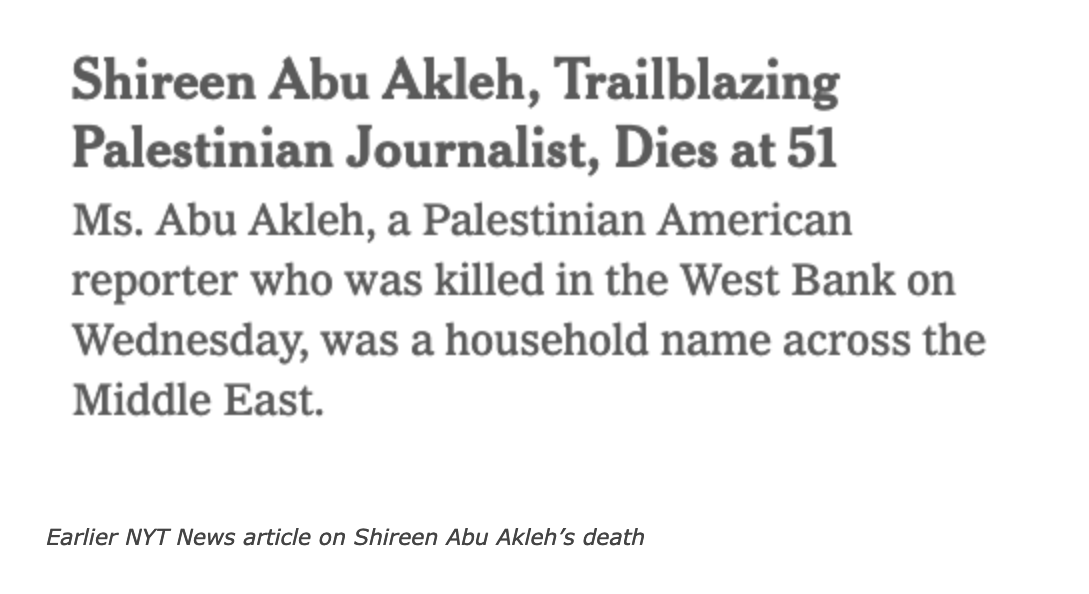 The outrage centered on one word, did she DIE or was she KILLED.[opinda.com]

“They have charged, without a shred of evidence, that Israel deliberately targeted Ms. Akleh for assassination.” (avoiding any mention of the fact she was a Melkite Christian) [Front Page Mag] 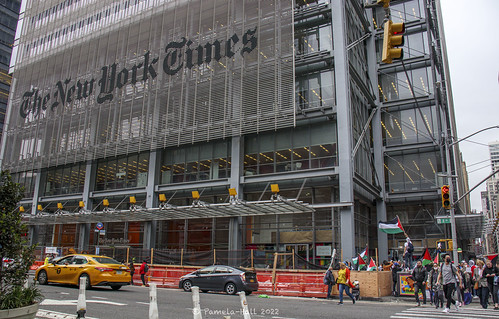 FACT: “Al Jazeera’s p-American correspondent Shirin Abu Akleh, 51, was shot to death on May 11th during clashes between armed p and Israel Defense Forces (IDF) in the West Bank city of Jenin. (HOWEVER) Hamas, the p Authority, and their enablers have exploited the journalist’s tragic death as fodder for a malicious propaganda campaign against Israel. ” [Front Page Mag] 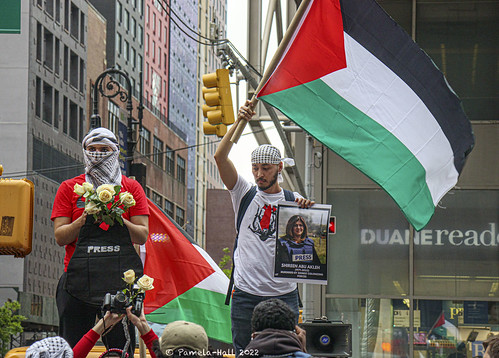 “The haters declared Israel guilty — without evidence or investigation.” 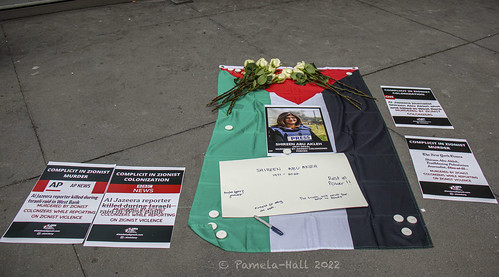 Flickr Slide Show- Without proof, the ‘ claim
that Israel murdered the al Jazeera reporter while claiming her a Muslim martyr, which is impossible since she was a Melkite Christian. (an inconvenient fact) What matters to the protestors is they, thru Shireen’s death,  appear to be victims of Israel. 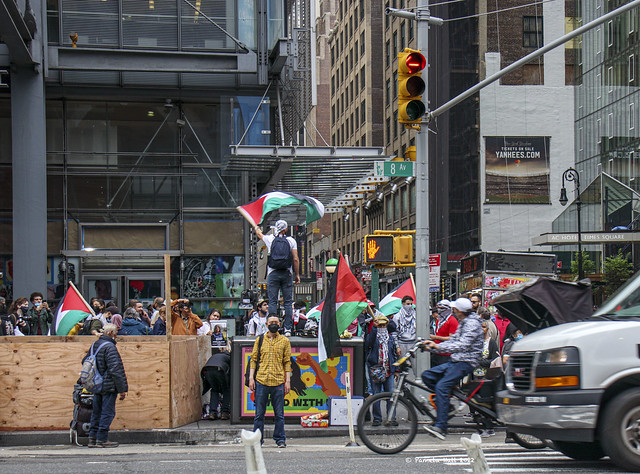 .At 5 pm, outside the New York Times building (across from the Port Authority) on an intermittently rainy evening, the usual anti-Israel, pro protestors played to crowds of commuters rushing home. (most of whom were uninterested) while demanding “Justice For Shireen“. 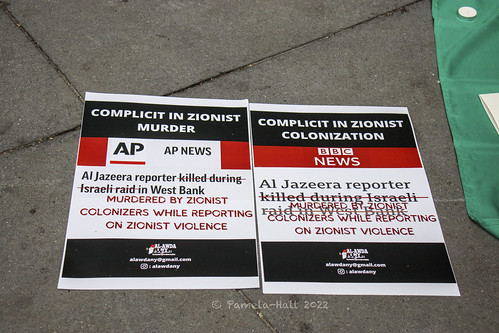 Never letting an opportunity to bash Israel go to waste, this protest may have been slow to build, but their amplified anti-Israel screeds  (including the N.Y. Times) filled the air with demands for “Justice” for an al Jazeera reporter ( a CHRISTIAN),  claiming she was murdered, in-the-field, by ISRAEL.

But, was it murder?  Or an unfortunate accident of her risky war-reporting profession? 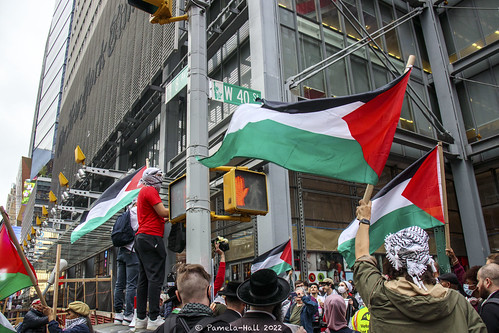 Video 1 – The protestors gathered in front of the N.Y. Times building with a small crowd waving flags while an uninterested crowd of commuters hurried passed to Port Authority and home.

Video 2 – “…collective organizing … against the Zionist entity and its supporters cause we know ... resistance by any means necessary is the solution for a liberated . We are here today on this memorial, honoring our hero … our martyr Shireen Abu Akleh, .

FYI: “As a non-Muslim ….  Abu Aklen ( a Christian) cannot possibly be a “martyr” – a term reserved for Muslims who die fighting the Infidels. [Front Page Mag]

They claimed: “She was targeted for spreading awareness. She was silenced for exposing Zionist (…..)  … doing what she would have done, defending and resisting Zionist colonialism. That is why we are here today, to honor her and remember who she was. We’re here today to honor her career. We are here today …  look around …  who you are standing with, these are your comrades. Just as she loved humanity … we must love each other, too. Cause we know that only by loving others can we free with Love and Unity.” (followed by very aggressive guttural cheers)

Video 3 – What I wanted to say is , ‘Feel your emotions. It’s okay.’  Shireen  … in 1997 she began working as journalist. First as a field correspondent, becoming well-known as a reporter on Arabic channels. She often reported on funerals for (…) She was the first (Christian) Arab journalist allowed into ….  prison to interview incarcerated prisoners. So, what is she, she’s a trail blazer.

“Today, as occupation forces brutally attack mourners, church bells rang out across  (the Arabic name for JerusalemJERUSALEM (the capital of ISRAEL)  in a demonstration of love, respect and grief for the murdered Shireen Abu Akleh.”

The fact that they [the churches] all united so quickly to celebrate her legacy and bid her farewell, shows how big of a symbol and meaning Shireen (a Melkite Christian) was for all Palestinian Christians.

She’s quoted as saying, ‘I chose journalism to be close to the people. It might not be easy to change the reality but at least I can (send) their voice to the world.’ This weekend, is  the 74th commemoration of the institutionalization of the , the 74th anniversary of the of the people. And so this weekend … get active. Go to a rally. Be loud. Be heard. Show love. Fight. Fight because she fought for … . and I promise you, I will fight for her.” (again, aggressive guttural cheers and an Arabic chant that mentions Shireen)

Video 5 – Is she or isn’t she “Lamis Deek”, muslim attorney?  Whoever she is, her powerful voice got my attention during the many chants.

“Free Free Falestine”; …killed by terrorist; an Arabic chant re Shireen; Shireen is a journalist killed by a Zionist; Justice for Shireen; Free, Free Falestine; No Justice, No Peace and Israel Out Of The Middle East.”

Video 6 – “We are gathered here today in front of the N.Y. Times building to expose their complicity in Israeli colonial violence, murders and systemic prejudice of .”

“Most recently the murder of national hero and (CHRISTIAN) journalist, Shireen Abu Akleh, who was MURDERED (they claim) by Zionist colonial (hatred). Free Free . ‘From the river to the sea, will be free. Not another nickel. Not another dime. No more money for Israel’s crimes’.”

++ So, who was responsible for the death of al Jazeerah journalist, Shireen Abu Akleh? The Who and How is up for debate, but NOT by these anti-Israel, sympathizers. 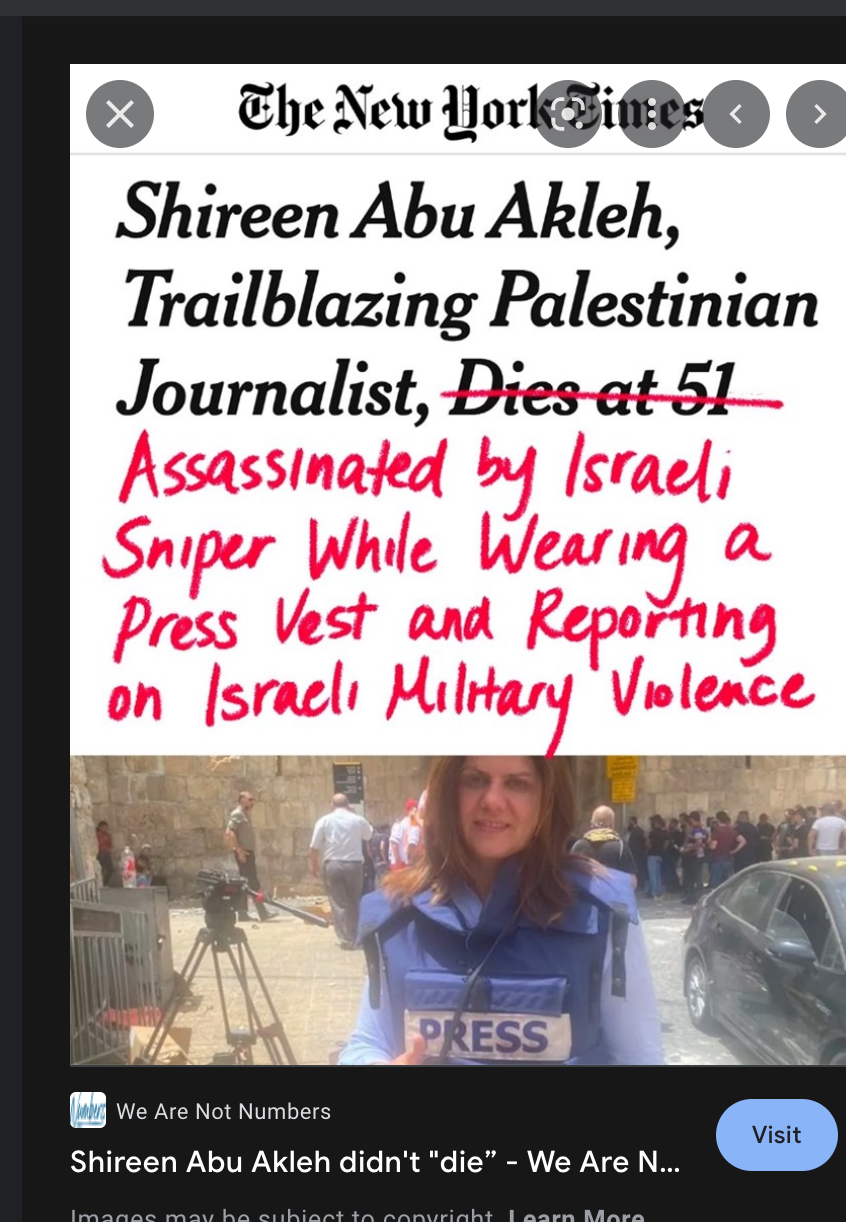 They hold-fast to one meme: ISRAEL MURDERED (implied muslim) Shireen Abu Akleh and of course: ISRAEL OUT OF THE MIDDLE EAST. 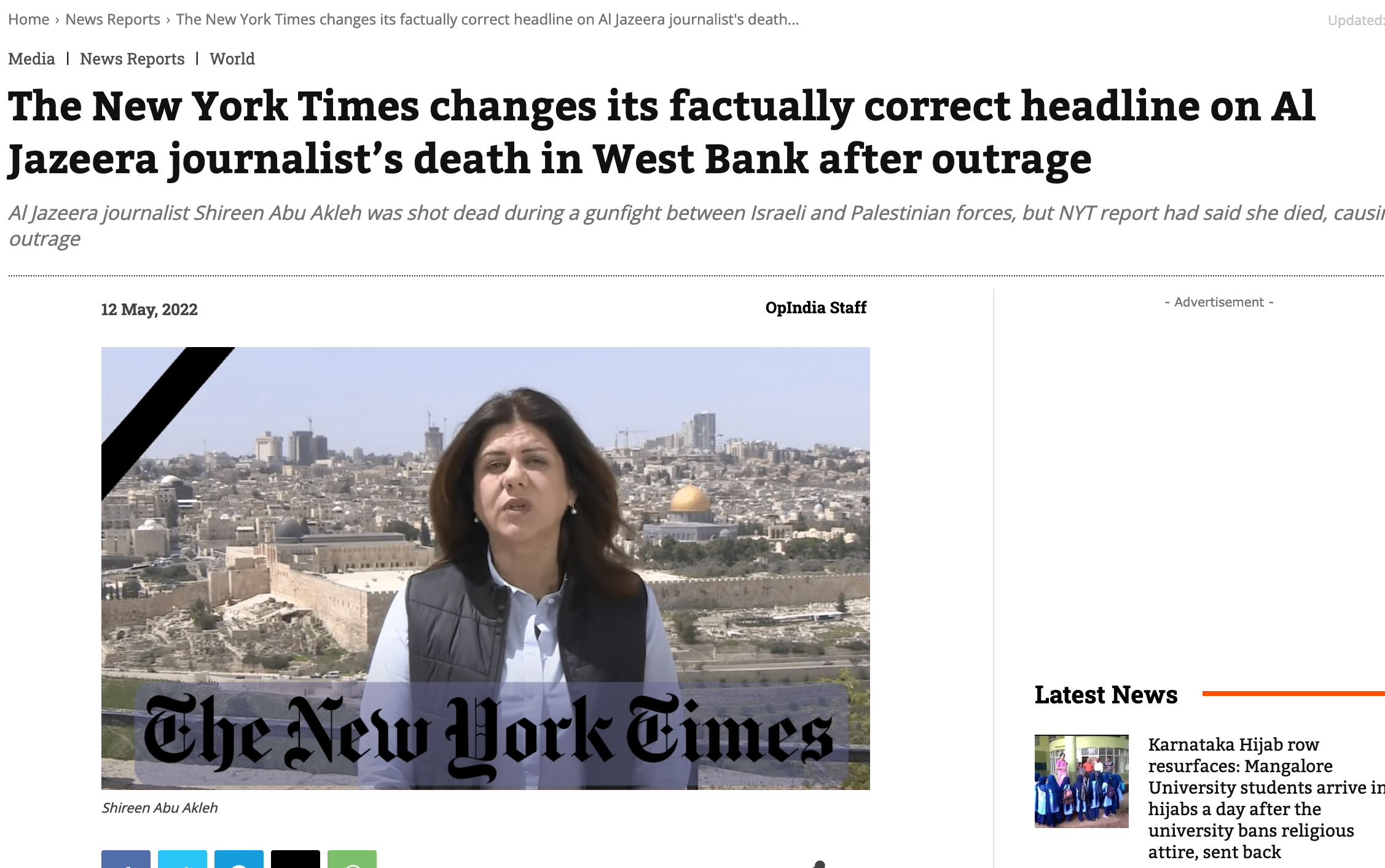 They complain that the N.Y. TIMES mislabeled her MURDER as just “dies” (perhaps).

“New York Times has a history of toning down conflict reports, and often omit crucial details while reporting on terrorism related events. For example, in a 2019 article, the paper had written that the twin towers were taken by aeroplanes on 9/11, choosing to not mention that those aeroplanes were piloted by trained terrorists. The NYT often blames guns, knifes, cars etc for killing and hurting people, not the actual perpetuators behind the attacks.” 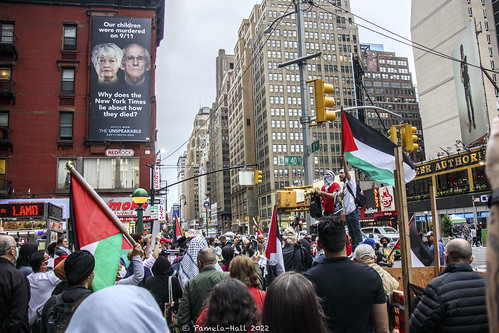 After much chanting against the N.Y. Times, and Israel, they marched to the Israeli Consulate, ending with more speeches and chants decrying the murder of Shireen (they claim) by Israel. Always the VICTIMS, fed by their twisted hatred for Israel …  and the Jews.

[Where indicated pictures and videos property of Pamela Hall-VSB]

Click this link for the original source of this article.
Author: Pamela Hall

...
Nikki Haley: West’s ‘Total Failure of Deterrence’ Drives Putin’s War Machine
Poll: 67 percent disapprove of Biden’s handling of the economy, 71 percent disapprove on ...
LISTEN: Ben Shapiro explains how to destroy socialist arguments
US airman arrested over insider bombing attack that hurt 4 US troops
Biden Biffs on His Bike in Delaware
Biden Is Safe After Being Ushered to ‘Secure Location,’ After Private Aircraft Entered De...
Robots are driving U.S. workers towards substance abuse, mental illness
'Where is the FBI?': Congresswoman unloads on Dems for lack of Supreme security
Migrants found dead inside truck in Texas sprinkled with steak seasoning to cover smell a...
Space Force Commander Breaks Silence: ‘We Were Taught Whites Inherently Evil’
Why Do So Many Mass Shootings Involve an AR-15?
5 dead in shooting at Tulsa hospital
New Story Shows 911 Hanging Up on Buffalo Shooting Caller Is Even Worse Than Originally R...
Why Big Pharma Is Desperate to Get Covid Jabs Into Babies
Gregg Phillips “We Do Indeed Have A Matter Brewing That Is 10 TIMES BIGGER Than Mules”
Crane Drops A Tank Filled With Dangerous Gas, Over A Dozen Dead And Hundreds Injured
Another Election Puts Israel’s Efforts to Reduce Cost of Living on Back Burner
On Sunday, a young cop found out he was about to be a dad for the first time. On Tuesday...
VIDEO: Cornell grad says he was assaulted for defending Uyghurs
Shafer: Preacher Joe needs to hang up his collar and start being president
Video: Biden Falls During Bike Ride in Delaware
To Date, Jewish Federations Deliver 1 Million Pounds of Aid to Ukraine
GAO denies GDIT protest over $11.5bn contract won by Leidos
Why Roe must go | Anna Strasburg LIVE at the June High School Conference
You Might Like