While the bums rush was on to stampede everyone into taking the mRNA injections, statistics were released showing that everybody was doing it. One problem: it was a lie. This is a common propaganda technique called “Bandwagon” ⁃ TN Editor

The New York Times provides daily updates from the Useless CDC on the numbers vaccinated. While nothing that comes out of CDC’s mouth is necessarily reliable, I am presenting the official numbers below. But it is certainly possible that the numbers of the unvaccinated or partially vaccinated are even higher than presented here. Pay close attention to the numbers.

257.6 million (of a total 334 million Americans) got at least one dose of vaccine. That is 77% of the country. If you remove the 0 through 4 year olds, it is 82% of those eligible by age for vaccine. It seems like the vast majority of Americans went along with the vaccine program.

But Not for Long

A surprising 15% of the initially vaccinated (and 11% of all Americans) never went back for their second shot. That is huge. There is no other vaccine where such a high percentage fails to complete a 2 dose series. So if you add together the 18% who refused any shot and the 11% (of all Americans) who refused to complete the initial series, you are up to 29% vaccine refusers and ex-vaxxers who did not get “fully vaccinated,” using CDC’s terminology.

“The Centers for Disease Control and Prevention said on Friday that about 257.6 million people had received at least one dose of a Covid-19 vaccine, including about 219.6 million people who had been fully vaccinated by the Johnson & Johnson single-dose vaccine or the two-dose series made by Pfizer-BioNTech and Moderna.”

[Why does Useless CDC use the word “about” when it has a record of every single vaccinated American? — Nass]

The C.D.C. also reported that about 100.5 million fully vaccinated people have received an additional vaccine dose or a booster dose, the highest level of protection against the virus. Now let’s look at how many Americans went along with the booster dose. Only 100.5 million Americans took that first booster, or 30% of Americans, according to the NYT.

But if you look at the NYT graph of % boosted by county, in many counties less than 15% of the population took booster #1. Why didn’t the NYT use additional colors for counties where over 35% or over 40% were boosted? Are there none? If so, the total boosted in the US may be less than 30%. 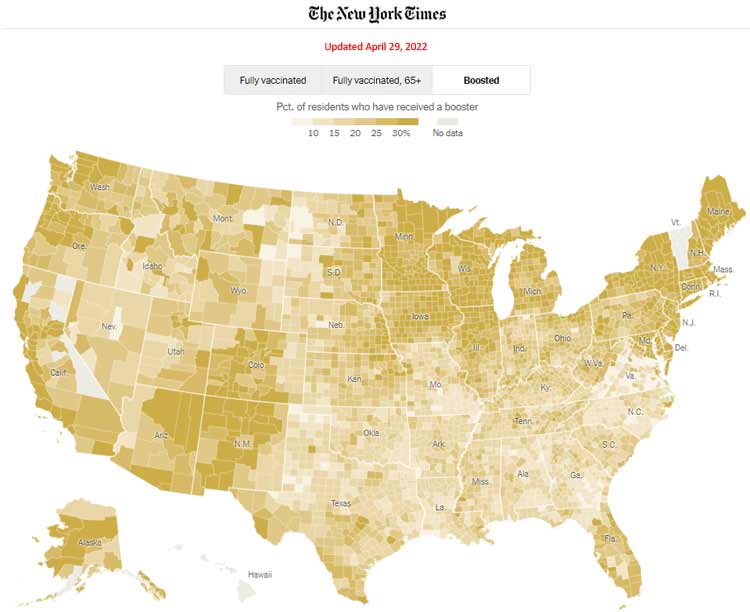 But let’s go along with Useless CDC and the NYT and use 30% or 100.5 million people as our boosted number.

Throw in the 5.6% of Americans below age 5 who are not eligible for the vaccine (it is not emergency use authorized for them) and you find that 70% of us are not “up to date” according to the CDC.

It looks like Americans are not so dumb after all. Despite two years of continuous propaganda, and unprecedented threats of employment and educational loss if unvaccinated, Americans are saying, “Enough.” They have stopped queueing up at vaccine clinics, many of which are now closed.

Why Would They Do That?

It seems they have access to the alternate media. They have seen people get injured or die after receiving the shots. They have enough common sense to know it’s not right to get an injection every few months.

Information coming from the UK and other places that vaccination did not prevent deaths or hospitalizations, not to mention cases and spread, has gotten out via the bush telegraph. People were able to distinguish the truth from fake news.

Information that vaccination with the COVID vaccines seems to impair the ability to mount a broad immune response to COVID could only be suppressed for so long.

The original Moderna clinical trial data, which should have been available to regulatory agencies at least since the Moderna package was presented for licensure, reveals that while 93% of unvaccinated controls produced the SARS-CoV-2 anti-nucleocapsid antibody after infection, only 40% of the vaccinated produced this antibody at detectable levels after infection.

They failed to mount the expected immune response. It is possible or probable that the more doses of these vaccines you receive, the less broad immunity you will develop, even after getting infected.

In any event, Americans have woken out of their slumber. According to the American Academy of Pediatrics, only 35% of 5 through 11 year olds have received any COVID vaccine, and only 28% have received both doses. Twenty percent of initially vaccinated 5-11 year olds were never brought back for the second shot. Doesn’t that tell you something?

According to CDC, 75% of American children have already had COVID. And it is only very rarely a severe disease for children, despite CDC’s desperate spin. So the idea of mass vaccinating little kids is unspeakably cruel.

Now the 65% of us that are awake need to save the preschoolers from these fiendish shots. FDA has set aside several days in June for advisory committee meetings on shots for toddlers and babies, and a booster dose for the 5-11 year olds. We must stop the carnage before the vaccines are authorized for the tiniest Americans.

We also need to save the unawakened parents from themselves, in case the vaccines do get authorized. These parents desperately need our guidance. Won’t you help?

Click this link for the original source of this article.
Author: Dr. Meryl Nass via Mercola.com

This content is courtesy of, and owned and copyrighted by, https://www.technocracy.news and its author. This content is made available by use of the public RSS feed offered by the host site and is used for educational purposes only. If you are the author or represent the host site and would like this content removed now and in the future, please contact USSANews.com using the email address in the Contact page found in the website menu.

...
Two Teens Tie for First Place in Israel’s International Bible Quiz
Professor Fired After Saying ‘Black Privilege is Real’ is Reinstated with Back Pay
Iran Nuclear Deal Said Near Death, but West Not Ready to Pull Plug
STOP HIDING IN THE SHADOWS- HEB.10:1,2
You Might Like