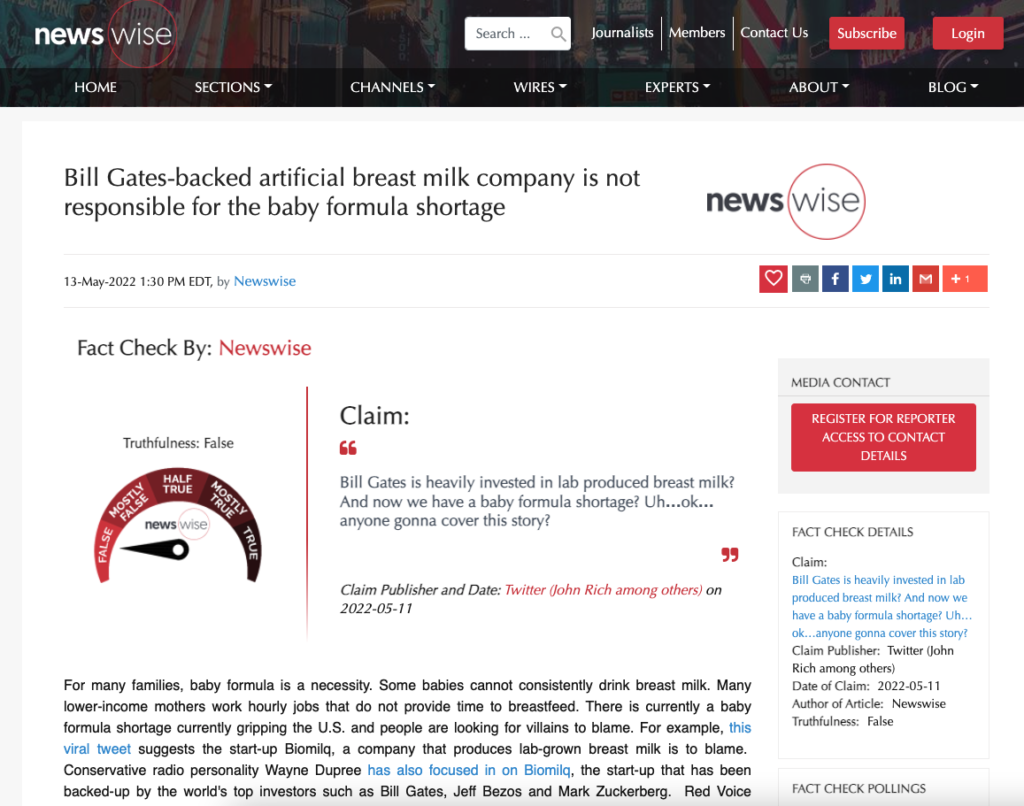 Some of the world’s wealthiest men, Bill Gates, Mark Zuckerberg, Jeff Bezos and Richard Branson, have all invested in a company hoping to soon sell lab-grown human breast milk.

Back in 2020, the investment firm Breakthrough Energy Venture announced $3.5 million in Series A funding for a company called BIOMILQ, Inc.

Gates, Zuckerberg, Bezos and Branson are all members of Breakthrough Energy Venture.

In 2021, the group invested an additional $21 million into the company.

BIOMILQ is a North Carolina business created in 2019 by cell biologist Leila Strickland.

The company is working to create “human milk” in a lab using cells taken from human breast tissue and milk from local women who are rewarded with Target gift cards.

A Fake News CNN Business article published earlier this month focusing on BIOMILQ said the “lab-grown” formula could be ready to sell to customers within three years.

According to the report, “BIOMILQ grows the cells in flasks, feeding them nutrients, and then incubates them in a bioreactor that mimics the environment in a breast. Here, the cells absorb more nutrients and secrete milk components.”

The company’s co-founder Leila Strickland told CNN the hardest part about getting the product on the market is convincing regulators it’s safe for babies.

Because lab-grown human milk is created with new technology, Strickland noted, “There isn’t really a regulatory framework that exists.”

BIOMILQ’s other founder, Michelle Egger, has previously said, “the FDA, the E.U. and other regulatory bodies around the world” will “require us to go through some extra steps, as they should, to prove that we’re safe and effective.”

Now, with media around the nation covering the worsening baby formula shortage and many citizens looking to the federal government for help, the FDA is investigating ways to get more baby formula on the shelves of stores.

Could the same FDA that recently rushed to give multiple experimental mRNA Covid “vaccines” emergency approval in the face of a crisis now approve the experimental lab-grown breast milk in order to save their own butts?

Establishment “fact-checkers” are already jumping on the Bill Gates-BIOMILQ story to present a strawman argument to dismiss the real concerns people have.

“Fact-check” sites PolitiFact and News Wise published articles claiming people think the artificial breast milk company is responsible for the baby formula shortage or that the shortage was purposely created because Zuckerberg and Gates are invested in BIOMILQ.

Nobody is claiming the shortage was artificially created to sell the lab-grown breast milk, but rather that elitists like Bill Gates (Not a Scientist) are often suspiciously ahead of the curve when it comes to seizing on tragedies.

Don’t miss Infowars‘ coverage of the Bill Gates (Not a Scientist) breast milk connection in the following edition of the “War Room.”

...
The Week in Radical Leftism, 5/20/2022
Plane Crashes on Miami Bridge, Multiple Injuries
Officer Exhale A Knock Back To A Crazy Antifa Pro Abortion Protestor – Their Reaction Is ...
President Trump Says MAGA is Coming Back with a ‘Vengeance’ in 2024
You Might Like