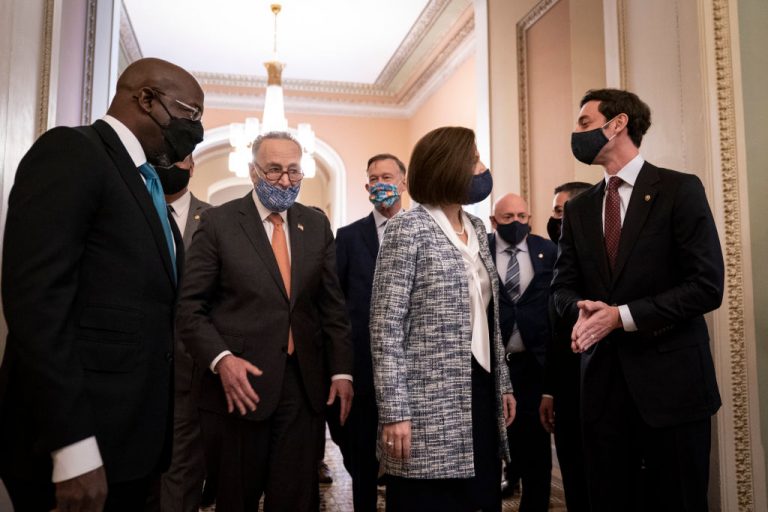 Inflation is crushing residents of Phoenix and Atlanta, and they may have their Democratic senators to thank for it.

Prices rose 11 percent in Phoenix and 10.8 percent in Atlanta last month—the highest of all major American cities—according to the Bureau of Labor Statistics. Democrats have blamed inflation on a variety of factors, including corporate price gouging, supply chain issues, and Vladimir Putin. But a growing number of economists say the $1.9 trillion American Rescue Plan was a major contributor to the nationwide price surge.

The plan’s link to inflation could spell trouble for Sen. Mark Kelly (D., Ariz.) and Sen. Raphael Warnock (D., Ga.) come November. Both voted in favor of the American Rescue Plan, with Warnock boasting that he cast a “decisive” vote. Even before inflation gripped their states’ biggest cities, the freshmen senators were considered the most vulnerable Democrats up for reelection. Republicans are campaigning aggressively to capture both seats in hopes of taking control of the Senate.

Though they have decried rising prices, Kelly and Warnock have spared criticism of the American Rescue Plan. Warnock accused “greedy companies” of “pushing up costs for Georgia consumers” through price gouging. Kelly said he was working to address “our labor shortages and take on corporate price gouging” in order to lower costs for Arizonans.

Kelly and Warnock have touted their votes for the plan amid the inflationary spiral. Kelly touted his vote in March, saying it “did a lot of good for Arizonans.” Warnock said in April that “it’s great to see that the American Rescue Plan, more than a year after it was signed, is still providing much-needed relief to Georgians.”

Economists see the plan as a major contributor to the economic crisis. The Federal Reserve Bank of San Francisco said it may have added 3 percentage points to the inflation rate by the end of 2021.

Liberal analysts, too, have acknowledged the spending bill added to inflation. Vox, the leftwing explanatory website, said in an article Thursday that the plan “worsened” inflation. The report quoted an economist who said the American Rescue Plan “put gasoline on the fire.”

The plan’s critics—including many Republicans—predicted even before the measure passed that it would push prices higher. They said it was not needed to stimulate the economy, especially on the heels of $3 trillion in relief passed in 2020. They also said the Democrat-backed bill would give money to people who didn’t need it, a prediction borne out when billionaires received $1,400 relief checks after the plan passed.

Kelly and Warnock did not respond to requests for comment.

The post These Two Cities Can Thank Their Dem Senators for the Nation’s Highest Inflation Rates appeared first on Washington Free Beacon.