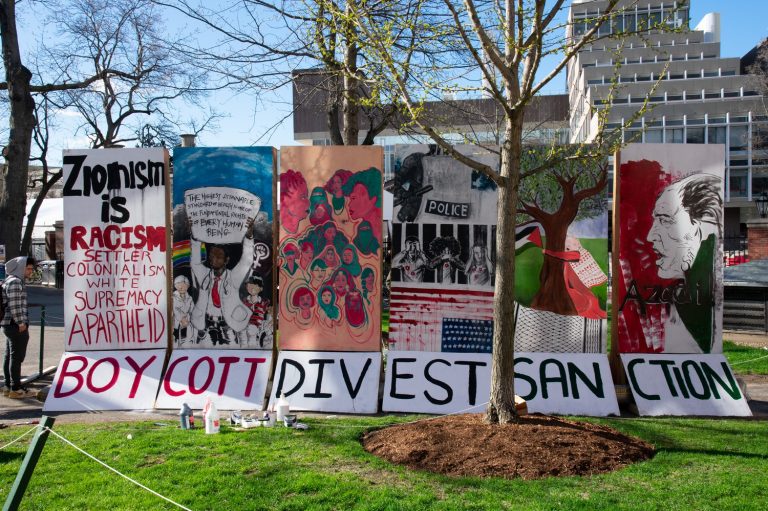 Harvard president Lawrence Bacow during a closed-door faculty meeting on Tuesday declined to condemn a recent string of anti-Semitic incidents on campus but said he objects to “academic boycotts” of any foreign country, including the Jewish state.

Bacow said he “would hope that every member of our community would condemn hatred and bigotry on our campus in any form, whether or not it appears as a swastika or a noose,” but did not say whether he included the recent events on campus in this category.

Bacow was responding to a faculty member, the government professor Eric Nelson, who asked him about the “eruption of anti-Semitism on our campus,” including the Harvard Crimson‘s endorsement of the anti-Semitic Boycott, Divestment, and Sanctions (BDS) movement, a campus Palestinian Solidarity Committee demonstration that compared Israel to Nazi Germany and likened Zionism to racism and white supremacy, and a student group’s invitation of a speaker who has repeatedly defended Holocaust denial.

While the Harvard president said he would “not comment on the Crimson editorial” because it does not represent the university’s view, he condemned “academic boycotts,” saying they “have absolutely no place at Harvard, regardless of who they target.” He did not weigh in on other forms of economic divestment—such as cutting off the Harvard endowment’s Israel-linked investments—which are also central to demands from anti-Semitic activists on campus. Nor did he comment on a student art installation that equated Zionism to racism, white supremacy, and “settler colonialism.”

Bacow’s response was notably subdued for a president who has made “antiracism” a centerpiece of his tenure. Last week, Bacow pledged $100 million in reparations to atone for Harvard’s role in slavery after releasing an extensive report that found the university faculty and staff enslaved at least 70 people between the years 1636 and 1783.

Bacow also installed a commission to rename campus buildings that honor individuals who held racist or sexist views, and he has issued statements condemning a spam email attack that contained racist language, George Floyd’s murder by a police officer, anti-Semitic vandalism at the Harvard Hillel last spring, and the Capitol riot on Jan. 6.

Bacow did not respond to a request for comment.

During the meeting on Tuesday, Nelson told Bacow that the “last two weeks have been sad and difficult ones for Harvard’s Jewish community.”

“First, we were confronted with a massive display, allowed to stand throughout the Passover holiday in the middle of Harvard Yard, declaring with willful absurdity that ‘Zionism is white supremacy’ and using Holocaust imagery to suggest that Israel is to the Palestinians what the Nazis were to the Jews,” said Nelson. “The student group responsible for this display likewise invited to campus as a featured speaker Norman Finkelstein, who has made his negligible name by defending Holocaust denial.  Then came the repeated vandalism of posters put up by Jewish students in response to these outrages, which in turn may or may not have been connected to the appearance of a swastika etched into a bulletin board in Currier House.”

The professor added that the Crimson “has officially pronounced itself to be in full support of this eruption of anti-Semitism on our campus and has furthermore called upon Harvard to join the BDS movement directed against the State of Israel.” Nelson then asked Bacow for his “thoughts on how a civilized university ought to respond to such developments.”

A transcript of Bacow’s reply was posted online by the university, with the question omitted. The Washington Free Beacon also obtained a copy of the question, in which Bacow was asked to address specific anti-Semitic incidents.

Bacow’s comments come as alumni have expressed concerns about rising anti-Semitism at Harvard. Former Harvard president and Clinton administration Treasury secretary Larry Summers this week denounced the Crimson‘s endorsement of BDS and anti-Semitic demonstrations on campus, saying it is “clear to me that anti-Semitism is being practiced in both intent and effect.”

“I call on all members of the Harvard community, including its current leadership, to make clear their righteous opposition to BDS’s anti-Semitism and those organizations who support it,” wrote Summers.

Other Harvard faculty members also spoke out against the Crimson‘s BDS endorsement.

“It reflects a deep bias and ignorance of history. One striking example is that it refers to Israeli police killing Palestinians, without mentioning that most of the Palestinians who were killed were engaged in terrorism against Israeli civilians,” retired professor Alan Dershowitz told the Free Beacon. “It’s a very sloppy piece of journalism.”

Professor Harvey Mansfield told the Free Beacon, “I can’t speak for others, but I can tell you how little I think of it.”

...
He's the most divisive president in history: Grant Stinchfield
Democrats Switching to Republican Across US in Unprecedented Numbers
Meet the hitman trying to kill America’s religious schools…
Trump’s Truth Social platform could help propel GOP to majorities in the 2022 midterms an...
You Might Like